The match won't be affected and it will go on smoothly, Andhra Cricket Association has said.

The third one-dayer between India and the West Indies to be played on October 14 is not likely to be affected due to cyclone ‘Hudhud’, which is expected to hit the port city by Sunday afternoon, organisers said.

The match at ACA-VDCA Stadium is not going to be affected and it will go on smoothly, Andhra Cricket Association said.

“The cyclone is expected to cross the coastline by post lunch time tomorrow (October 12). Therefore, the one day match (on Oct 14) is not going to be affected. It will go on smoothly,” the association said in a release here.

The entire ground has been covered and the pitch is being prepared under the supervision of BCCI curator P R Viswanath.

ACA has all the required equipment to take care of showers that may be caused by the cyclone. The drainage system at the venue is excellent and capable of taking out water in no time, the association said. “But in case the match is washed out, spectators who have bought tickets will be refunded,” it added. 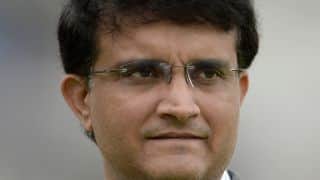 Sourav Ganguly: No sport apart from cricket can guarantee a future in India