The all-rounder believes Australia will serve the Indians a dose of their own medicine.

Australia were blanked 0-4 by India in their away tour last year, but their all-rounder Shane Watson on Wednesday said that his side would be hard to beat when the same opponents tour Down Under for a four-match Test series later this year.

Watson’s optimism stems from the fact that the team composition and environment is different to the one that suffered a humiliating loss in India as indicated by the fact that they defeated the International Cricket Council (ICC) top-ranked South Africa 2-1 in the latter’s backyard recently.

“We’re playing some very good tough Test cricket. We beat South Africa on their home soil which was a huge achievement for us as well. So under all these conditions, we’re certainly going to be hard to beat,” Watson, the captain of the Indian Premier League (IPL) franchise, Rajasthan Royals, told PTI in an e-mail interview.

“It’s certainly a totally different unit to what we were in the Test series we played in India. We had a lot of issues that were going on in and around our team. So it’s certainly a very different environment now that we’ve got,” he explained.

Watson was referring to the suspension of himself and three other players by the team management from the third Test at Mohali for failing to complete homework assignment after the heavy losses suffered by the visitors in the first and second Tests and Chennai and Hyderabad respectively.

Also dropped for the Mohali Test for the same reason were batsman Usman Khawaja and pace bowlers James Pattison and Mitchell Johnson. Watson had a poor series, accumulating only 99 runs in three Tests with a highest score of 28.

He feels India’s plight in Australia in adapting to wicket conditions would be similar to theirs in this country.

“Certainly the conditions that we played here in India during the Test series were very extreme to what we would ever face in Australia.

“So, the Indians would have to come over and adjust to the pace and bounce and wickets, with how we are as a team. We are a much better and tighter unit and playing much smarter cricket, specially Test cricket,” said the all-rounder who has played 52 Tests.

Asked about Australia’s poor outing in the recent T20 World Cups as compared to their dominating shows in Tests and ODIs, Watson said the key lies in adapting to the conditions in the sub-continent and credited IPL for being able to do so at a personal level.

“I think the biggest challenge for our Twenty20 team is the way that we adapt, especially to different conditions.

“Certainly the Twenty20 World Cups have been in the sub-continent, the last two especially, and we just haven’t been able to exactly adapt to the conditions that we were playing on well enough,” Watson said.

“And that’s something that I have certainly learnt through the Rajasthan Royals, how you really are able to maximize that talent and the skill set that you’ve got in and around the group. That’s something that we just haven’t been able to exactly nail in Twenty20 cricket especially.

“In Twenty20 cricket for Australia that’s primarily one of the reasons, and if one or two players haven’t absolutely dominated a game, we’ve lost that game.

“Whereas what I’ve realized playing with Rajasthan Royals is that you don’t have to have one or two players to dominate a game, if everyone really puts their skills together on one day, there does not have to be a standout player for you to be able to win. So, I think that’s where we’ve fallen down the most in Twenty20 Cricket for Australia,” he added.

Conceding his own poor form in the recently concluded T20 World Cup in Bangladesh, Watson hoped he could turn it around in the IPL commencing in the UAE on Wednesday.

“Well especially recently I was very poor in the last Twenty20 World Cup. But the previous Twenty20 World Cup in Sri Lanka I got ‘Player of the Series’. So I have to say that I would replicate that pretty well,” he said.

“But certainly most in recent memory, which is the Twenty20 World Cup in Bangladesh, I was very poor.. so I’m certainly hoping that I could turn that around this IPL.”

Asked who would he choose — between his compatriot Johnson and South Africa’s pace spearhead Dale Steyn — as the best pace bowler in the world currently, Watson said both were top-class bowlers.

“They are both very different bowlers, but they’re both incredible bowlers. Dale Steyn’s dominated for just about his whole career. His longevity as a fast bowler and what he’s been able to do is just incredible,” Watson said.

“So they are very different bowlers but certainly with recent memories, they’ve been able to achieve some pretty incredible things,” he said. 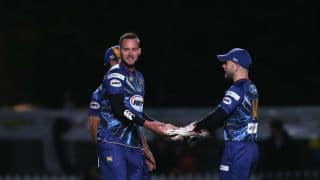