Dinesh Karthik and MS Dhoni added 31 runs for the sixth wicket to hand India a 5-wicket win at Mumbai.

Sri Lanka despite scoring 135 gave India a tough time in the third and final T20I at Mumbai. India eyeing a bilateral series whitewash, were helped by MS Dhoni and Dinesh Karthik in the end to secure a 3-0. This was also India’s first T20I win at Wankhede.

Riding on fortune, Rohit Sharma started his innings in the same fashion as Indore. Chasing 136, KL Rahul and Rohit were cautious to begin. The pair were troubled by Akila Danajaya and Dushantha Chameera’s tight bowling.

Rohit could have been out in the first over but Rahul became the first casualty of the innings. He fell to Chameera for 12.

Local boy Shreyas Iyer opened his account with a boundary as India looked to wrap up their chase in quick time. Rohit along with Iyer took charge of the chase with Sri Lankan bowling struggling with dew at Wankhede. He slammed his 11th six of the series to surpass Graeme Smith’s record of most sixes in a T20I bilateral series. Also this was his 65th six in 2017; a world record for most in a calendar year across formats.

Rohit could not do much henceforth as his innings came to an end on 27. Trying to heave Shanaka over deep midwicket, he handed Kusal Perera a simple catch.

Manish Pandey came at No.4 much to the disappointment of the crowd at Wankhede. Pandey and Iyer weathered storm kept the scoreboard ticking without much risk. The slowly but steadily added 42 runs in 38 balls.

It was sour pill to swallow for Iyer as he was run out at the non-strikers end for backing too much. He fell for 30.

Dhoni continued to elude Wankhede as Hardik Pandya came out to bat. He too fell soon making a run-a-ball 4. Dinesh Karthik came out in the middle at No.6; still no signs of Dhoni. With back-to-back tumbling of wickets, Pandey upped the ante only to fall for 32 off Chameera.

With 28 runs to win, Dhoni walked in the middle amidst a loud roar from the crowd. It took a lot of patience and time for Karthik and Dhoni to muster runs.

India needed 9 from 7 balls when Pradeep erred with a rank-bad full-toss. Karthik punished it for a six to relax the nerves in the dressing room. It was a boundary off Dhoni’s blade in the following over that finished the game. The pair added 31 runs for the sixth wicket to hand India a 5-wicket win. This was also India’s 10th T20I win over Sri Lanka.

Man of the Match & Man of the Series : Jaydev Unadkat 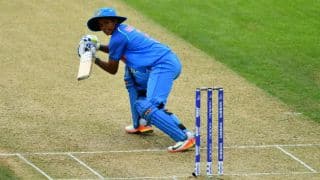