India Women combat a competitive total of 140/5 winning by 5 wickets against Australia Women. Harmanpreet Kaur, who has been an all-rounder for India Women, played an incredible innings of 46 from 31 balls. Australia Women won the toss and chose to bat first who posed a total of 140/5 in 20 overs. Australia Women did not start their innings well but slowly picked up at 89/5 in 15th over when Alyssa Healy and Alex Barcewell gave finishing touch to the game with Alyssa playing 40 from 15 balls and Alex scoring 27 from 22 balls. Poonam Yadav and Anuja Patil picked two and one wicket each for India Women. They posed 50 runs partnership in spite of which they lost the match.

India Women took it over from Australia Women left though India Women could have begun well if Mithali Raj could have pulled it off, in spite of which they took the lead and won the game. Rene Farell picked the first wicket for Australia Women within second over and caught comfortably by Sarah Coyte. Smriti Mandhana and Veda Krishnamurthy secured 50 runs stand and yet were unable to maintain the partnership. Anuja came in to batting at the 15th over and India were 103/4. Australia Women showed some great talent with their bowling spells restricting India Women time to time, yet India Women lead the game with first win in the series.

Live streaming is available for every country in every possible manner be it online, broadcast or live updates on particular websites. This makes it easier for a person to watch their favorite sport on the go. With the availability of technology, it is a huge boon to mankind that sports are available with internet connections getting better. However, viewers should avoid websites which broadcast illegal streaming and prefer legalised streams to watch their sports. 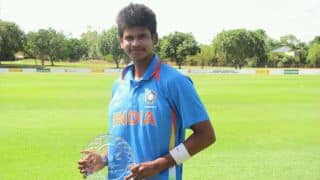