Catch the live blog of Day Three between India and England Women here.

India Women require 62 runs to win with six wickets remaining. However, Shubhlakshmi Sharma has dislocated her shoulder. So India ideally have five wickets. England will have the upper-hand tomorrow morning, as the moisture is going to help the bowlers. Kate Cross and Jenny Gunn has had a good day. Jenny Gunn’s unbeaten 65 and Kate Cross’s three wickets have helped England on Day Three. That is all from Wormsley’s one-off Test. Mithali Raj and Shikha Pandey will return to bat on the last day of the only Test between this two teams.

England are not doing much to break this partnership. India are happy with the way theyr are playing right now.

100 is up for India. The batswomen are happy with the way things are going on. Slow, but as long as they are not losing any wicket.

India require 85 runs to win with eight wickets remaining. We saw a couple of boundary from Mithali Raj and just one from Poonam Raut.

That is half-century for Smriti Mandhana. Fifty on Test debut. Eighth Indian batswoman.

The partnership between Smriti Mandhana and Thirush Kamini is the highest in the match right now. Smriti is the more aggressive between the two players.

We are back after Tea, and 50 runs up for India Women. Smriti Mandhana and Thirush Kamini smashing boundaries after boundary. That was followed by four maiden overs. India took 24.1 overs to reach 50 runs with no loss of wicket. Good partnership between the two cricketers.

Slowish start by India Women. Good bowling so far from Jenny Gunn, Anya Shrubsole and Kate Cross. There was a big appeal from Kate for LBW but umpire Billy Taylor is not impressed.

Anya Shrubsole bowled the first over and Jenny Gunn bowls the second over. The crowd is increasing at Wormsley and Sun is out. India need 181.

England has put up a target of 181 for India to win. Four catches for Karuna Jain and four wickets for Jhulan Goswami. Shikha Pandey takes her second wicket. Jenny Gunn remains unbeaten for the second time in the match. She picked up four wickets.

Sonia Odedra was dismissed by Jhulan Goswami. That was the pacer’s fourth wicket and a superb catch by Karuna Jain. England lead by 171 runs.

Jhulan Goswami removes Anya Shrubsole with the first ball after lunch. And with that we have new record of most LBW dismissals in a women’s match. It is 18 LBWs now!

Jenny Gunn and Anya Shrubsole’s partnership is unbeaten on 58. England lead by 159 runs. Jenny is on 45, which is her highest Test score. Her previous highest score in Tests was 44, which she scored at Perth in the Women’s Ashes Down Under. The Oxfordshire girls are entertaining the crowd right now. Here is the Lunch Report.

England have moved on to 181-7 at lunch, a lead of 159. The @Oxoncb girls entertaining the crowd now pic.twitter.com/vX8fa70g3R

Lunch at Wormsley. England lead by 159. Jenny Gunn and Anya Shrubsole’s partnership is over 50 runs now. England have taken the upper-hand.

News coming in that rains have stopped for now and players are coming out. Play may start soon. New ball has been taken and Jhulan Goswami will bowl. Can she break this partnership?

It has started raining at Wormsley. England Women lead by 142 runs and they still have three wickets left. Jenny Gunn, who took five wickets in the first innings, is going strong on an unbeaten 32. India will look to return and remove the remaining wickets.

Shubhlakshmi Sharma, who removed Sarah Taylor this morning, has picked up a wrist injury. She dived to stop a ball from running to boundary. Anya Shrubsole was the batswoman. Things doesn’t look good. Break in play. Indian officials are looking into it.

There seem to be some problem at the Press Box at Wormsley. Wifi down!

WiFi down at Wormsley. England are 154/7

Jenny Gunn and Anya Shrubsole seem to have settled down quite well. Apart from few maiden overs, England Women are looking good, especially with 132 runs lead.

OUT! Sarah Taylor b Shubhlakshmi Sharma 40(95)

After hitting Shubhlakshmi Sharma for a couple of boundaries and then she gets clean bowled by the Indian. Big break for India. England lead by 101 runs.

Shubhlakshmi Sharma starts the proceedings for India. Five runs from the over.Sarah Taylor smashes a full toss for a four on the last ball. England lead by 93 runs.

Here is how the pitch looks like before the start of play on Day Three.

A look at the pitch before the start of day 3 – play resumes at 11am tickets available on the gate #womenstest pic.twitter.com/TrDe1Lp8tI

Hello and welcome to CricketCountry’s live blog of Day Three of the only Test between India Women and England Women at Wormsley. I am Sudatta Mukherjee and I will be bringing the live updates to you. Riding on Sarah Taylor’s unbeaten knock of 30, England have taken the lead by 88 runs on Day Two. The day’s play was called off due to bad light after rain halted the proceedings of the day for an hour or so. Read the match report of Day One here.

The hosts lost early wickets but were looking steady at 73 for three when play resumed after rain interruption cost them two more wickets with a lead of just 62 runs. Jhulan Goswami (2-22) started the rot after scalping opnener Heather Knight for nought and Shikha Pandery (1-22) soon got the other opener and danger-woman Lauren Winfield for 35. Left-arm spinner Ekta Bisht also picked two wickets (2-15) to give the Mithali Raj-led team some hope in the low-scoring game. Catch the live scorecard of the match here. 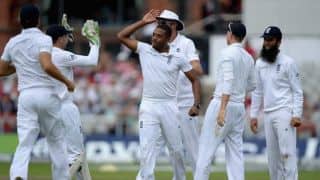 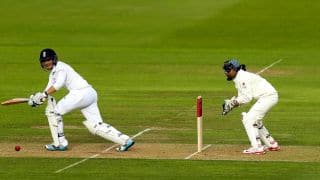