Catch the live updates of Day Four between India and England Women here.

India Women returned to Test cricket after eight years and have successfully beaten England Women to register their back-to-back win against the hosts. The last time India won was at Taunton in 2006. This is India Women’s fourth Test victory and second against England. England have managed to win only once against India. A great start for India Women in the series. Time to sign off from here. Hope you have enjoyed. Thanks!

. @GunnJenny is awarded the player of the match award in a losing cause in the Kia Women’s Test #EngWomen pic.twitter.com/RFTeT6YJHj

Player of  the match – Jenny Gunn for her five-wicket haul and an unbeaten 62.

Shikha Pandey hits the winning runs, as India registered their second Test win against England and back-to-back win, with a gap of eight years in between. Mithali Raj unbeaten on 50. Really a historic moment for India Women.

India closing near to victory. 27 runs to win.

New ball has been taken. Billy Taylor waves it. Kate Cross to bowl and Shikha Pandey faces it. India require 30 to win.

Mithali Raj and Shikha Pandey are taking one at a time. They are not hurrying and taking chances. A lot of cheering and clapping by the England players. India require 47 runs.

Few chances missed by England. Mithali Raj dropped by Sarah Taylor and Shikha Pandey almost trapped for leg-before, but there was big thick edge. India need 55 runs to win with six wickets left. However, keeping in mind Shubhlakshmi Sharma is unlikely to play, India have five wickets in hand.

Anya Shrubsole bowl the first over of the day. Kate Cross is the second bowler. Couple of runs from India. Shikha Pandey, night watchman, is out there with Mithali Raj.

The England players gathering at the front of the pavilion before the start of play pic.twitter.com/fzmYTMXJxV

England women huddle infront of the @WormsleyCricket Pav before the start of the final day in the Kia Women’s Test pic.twitter.com/LyXG735eYT

Welcome to CricketCountry’s live blog of Day Four of the only Test between India and England at Wormsley. I am Sudatta Mukherjee and I’ll be bringing the live updates of the match. The Indian women’s team are in a far better position than their men’s counterpart. India are 62 runs away from a win with six wickets in hand.

Sarah Taylor’s 40 and Jenny Gunn’s 62 helped England post 202 leaving India to chase 181. India got off to the best possible start when Thirush Kamini and Smriti Mandhana shared a 76-run opening stand. Mandhana lead the innings with a half-century. However it was Kate Cross who turned things around bagging three of the four wickets to fall. Read more about Smriti’s knock here

India’s fortunes could revolve around the experienced Mithali Raj who is batting on 20 having faced 69 balls. If India go on to win this, it would  indeed be a memorable one for them. They are playing a Test after eight long years and the team has as many as eight Test debutants.

Watch the highlights of the third day’s play below 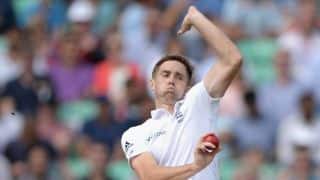 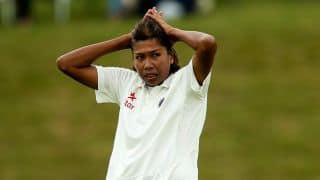