India Women would be highly disappointed with their efforts after the much-successful South Africa tour.

India Women fared poorly with the bat in all three ODIs versus Australia. With scores of 200, 227 and 235 (all-out), they always played the catching–up game. In addition, they failed to contain the run-flow and conceded 332 for 7 in the dead rubber tie at Vadodara on Sunday. As a result, they lost the encounter by a whopping 97 runs to concede the series 0-3. Mithali Raj and co. have been mauled at home after the highs experienced in the recently-concluded South Africa tour.

Chasing 333, Smriti Mandhana and Jemimah Rodrigues started off well. The duo put on a 101-run stand in less than 14 overs. The tone was set courtesy Jemimah’s 41-ball 42 and Smriti’s well-compiled 52. However, Ashleigh Gardener dismissed both the players. At that time, India were going at more than the required run-rate (over 7), and were kept in the hunt with a brief partnership between Mithali and Harmanpreet Kaur.

The downfall was initiated with Harmanpreet’s (25) wicket. Few dry overs kept Deepti Sharma and Mithali on their toes. In order to brake the shackles, Mithali took charge but fell soon. She departed for 21. The writing was on the wall since then. The top and middle order fought to an extent but the lower order issues continued. Apart from Sushma Verma’s 30, no one reached double figures. Gardener, Ellyse Perry and Megan Schutt shared seven wickets in between to strangle the hosts.

Earlier, opting to bat first, Australia continued their dominant show. While Indian Eves got rid of in-form Nicole Bolton early, the innings was held by Alyssa Healy. Her maiden ODI hundred ensured regular flow of runs. She added vital stands with Ellyse and Rachael Healey, and scored more than 60 per cent of her runs through boundaries. India used eight bowlers depicting their plight but only Ekta Bisht, Deepti Sharma and Poonam Yadav were economical. Harmanpreet got two wickets in the end but by then, Australians had piled up a huge score the highest by any opposition versus India.

Player of the Match: Alyssa Healy 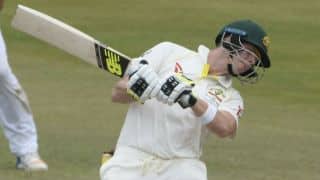