Mithali Raj will lead India in the three ODIs

Opener Mithali Raj will lead a 15-member Indian women‘s team in the three-match ODI series against Australia to be held at Vadodara from March 12-18, BCCI said today. “The All-India Women’s Selection Committee has named the India Women’s squad for the Paytm ODI series against Australia Women. The three-match series that will be held in Vadodara is part of the ICC Women s Championship (2017-2020),” BCCI acting secretary Amitabh Choudhary said.

The Indian women’s team had a highly successful tour of South Africa as Mithali led the ODI side to a 2-1 win, while Harmanpreet Kaur guided a young squad to an emphatic 3-1 victory in a five-match T20 International series to complete a rare double. India will start the three-match series with the first one-dayer on March 12, followed by the second and third game on March 15 and Match 18 respectively at Vadodara.

“The ODI series will be followed by the T20I tri-series and the squad for the same will be named later,” BCCI said in a release.

India Women’s ODI squad is as below: 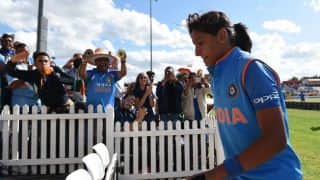