He is touted as Australia's next big pace sensation who will make life difficult for Indian batsmen in the upcoming Test series but not too long ago, James Pattinson was nothing more than a fringe player even for his IPL team -- the Kolkata Knight Riders. 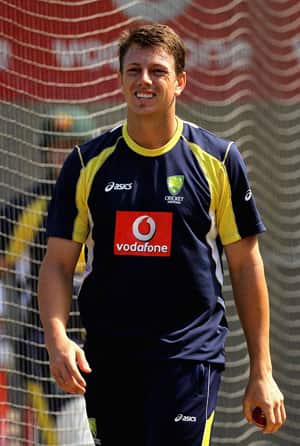 He is touted as Australia’s next big pace sensation who will make life difficult for Indian batsmen in the upcoming Test series but not too long ago, James Pattinson was nothing more than a fringe player even for his IPL team — the Kolkata Knight Riders.

Team India is justifiably bewildered at the noise which surrounds Pattinson ahead of the opening Test starting on Monday.

Just two Tests old, the 21-year-old speedster is hailed as the enforcer who would bring India’s superstars to their knees in the four-Test series.

It’s the same Pattinson who was in the Kolkata Knight Riders’ squad during the Indian Premier League last year and was hardly given a look-in. He now has the opportunity to take it out on his Indian captain Gautam Gambhir for being so dismissive of him earlier this year.

Bought at his base price of USD 100,000, Pattinson had turned out in only four first-class games for Australia at that stage. But for obvious reasons, KKR didn’t see any merit in pushing him ahead of star pacer Brett lee.

In a matter of six months, Pattinson is one of most talked-about bowlers from Australia. He bowls in the high 140s and moves the ball disconcertingly for any batsman’s comfort.

Former Australian cricketer Dean Jones is also from Victoria and has seen enough of Pattinson to think he is a genuine star performer.

“It’s like when your car hits a chicken, it gets a little jolt. But when the car hits a cow, you are startled by the impact. It’s the same with Pattinson, when he hits the bat, it jars. He’s the real thing,” he explained.

But now that the Indians know the tall Victorian is gunning for them, they are losing no opportunity to prepare for what he might dish out in the middle.

Sachin Tendulkar has spent hours and hours on the bowling machine for simulated batting against outswingers bowled at quick pace.

VVS Laxman even wanted Tendulkar to see if he was coping up well against outswingers. Importantly, if his bat was coming down correctly in defence.

“I was trying to prepare for what we expect would be the line of attack during the Tests,” Laxman said in earnestness when asked on his preparation.

Mahendra Singh Dhoni too opened himself to a bowling machine in the nets on Sunday. He too wanted to practice against that probing line of on or outside the off-stump.

It’s a preparedness which is well thought of. Pattinson has gone public on how he sought the advice of England bowling coach David Saker ahead of the present series and how he’s going to emulate the line of attack which James Anderson adopted so successfully against the Indians this summer.

“I have spoken to David Saker quite a bit because they had some good success against India over in England, so I spoke to him (about) a few of their plans, a bit of research into methods to get them out,” said Pattinson.

Pattinson has harped on the ageing Indian line-up and believes it could be found out on Australian soil this summer.

“You watched them (Indian batsmen) in England and you felt that (signs of decline) at times.”

“It’s going to be a pretty big challenge [but], you know, they’re starting to get a bit older now, so I might hopefully have them at the right time,” said Pattinson, who collected five-wicket hauls in each of his first two Tests.

Pattinson said he would discard the option of bowling a barrage of short-pitched bowling. Instead, he suspects swing is the way to go against the indians.

“Pitching it up and swinging the ball in the right areas is pretty good especially with their batting line-up, they’ve got a lot of right-handers so you’re going to have to bowl that way,” he said.

“You say they don’t like the bouncer but a lot of people could take that the wrong way and bowl them all the time, it’s bowling your bouncer at the right time and it has to be a good one,” he added.

Pattinson professes he is not intimidated by the Indians. Rather, he wants to be intimidating to the visitors.

“You respect them really well for who they are and what they have done, but come game day you can’t be intimidated, you’ve got to be intimidating,” Pattinson said.

“So even though I’ve only played two Tests I think I can do that, I can come with aggression, the same as ‘Sids’ (teammate Peter Siddle), and we can lead the attack. It was great to get some performances in my first two Tests to sort of get them thinking about me as well as Sids,” he said. (PTI)