Indian cricketers will have to wear the never-say-die attitude, like that of Virat Kohli, on their sleeves whenever they step on to a cricket field for remaining a competitive team, former Australia spinner Stuart MacGill has said. 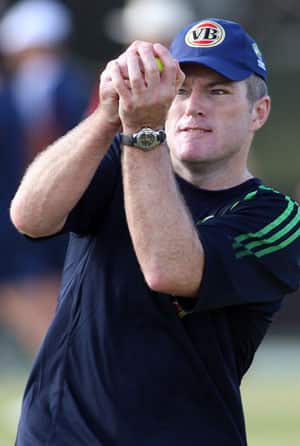 Indian cricketers will have to wear the never-say-die attitude, like that of Virat Kohli, on their sleeves whenever they step on to a cricket field for remaining a competitive team, former Australia spinner Stuart MacGill has said.

MacGill said the way India played in Hobart, where they chased down a 300-plus total inside 40 overs, was the way forward for the beleaguered side.

“Throughout the Test series, the high profile, highly paid Indian top order failed to fire. This problem continued so far into the one-day series. At the SCG last weekend they never looked like competing and yet in Hobart they produced the fastest 300-plus run-chase on record.

“Kohli, 23, smashed 133 from 86 balls but saved his best for the post-match interview. ”We are going to think each game is the last for us, and we are going to think of every game as do-or-die if we reach the finals,” Kohli said. They didn’t reach the finals but probably would have if they’d arrived with this attitude three months ago,” MacGill wrote in his coloumn for Sydney Morning Herald.

MacGill questioned the laid back attitude of the Indian players.

“The sense of entitlement you get watching the Indians on tour is overwhelming. They are obviously being held back by the fact they generate the majority of world cricket income, because, far from having a do-or-die attitude, they appear to believe winning is secondary to the appearance.

“If you’re simply touring the world entertaining fans and driving TV revenue, then you don’t belong in a national team. The next game really should be your last.”

MacGill though was full of praise for some of the Young Indian batsmen.

“One of the huge advantages I had in my career was that, because of its stop-start nature, I often felt like I was playing my first Test. I had no problem being excited and enthusiastic and I was always dying to have a bowl.

“This attitude is evident in India’s young guns based on the way they tend to burst onto the scene. If they listen to Kohli and play like there’s no tomorrow, they can preserve this feeling and retain the competitive spirit missing in some of their more experienced teammates,” he wrote. (PTI)