The 18-year-old has made his way up the ranks of NSW cricket rapidly, and captained Australia to the Under-19 World Cup final this year.

Having completed high school, Jason Sangha, the teenage Australian batting prodigy of Indian origin, is hopeful of breaking into the New South Wales senior setup after a successful season in which he captained his country to the ICC Under-19 final this year.

With two first-class and List A appearances to his credit, including a score of 133 for Cricket XI to become the youngest Australian to score a first-class century versus England, Sangha is targeting a full season with NSW.

“I d love to go play the JLT Cup for the Blues, have a crack this year in the BBL and make my Shield debut,” he told cricket.com.au. “It was nice to get that exposure to play first-class cricket against England. That is something I’m extremely proud of and extremely grateful for as well. Hopefully to get that opportunity again, I think I’m actually ready for it this year.

In 2016, Sangha became the second cricketer of Indian origin to be contracted by NSW, alongside fellow teenager Arjun Nair, and the youngest, at 16.

Now 18, he has made his way up the ranks of NSW cricket rapidly, having scored heavily in the Under-19 National Championships and then registering a century on debut for the Australian U-19 team. As a state level debut awaits, Sangha looked back at a run of middling scores as the possible reason why NSW have not handed him a baggy blue already.

“Last year I felt like my game needed a fair bit of improvement. If I’m being brutally honest I didn’t feel I was ready for it, he said. “But this year, with the good pre-season I’ve had up with the NPS (National Performance Squad, the group of talented youngsters who train in Brisbane at Cricket Australia’s high performance centre), being with the Blues and my first year out of school as well to take cricket really seriously, I feel like I’m in a pretty good place.” 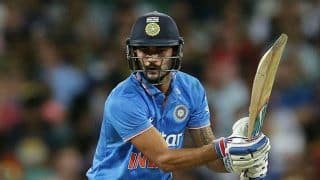 India B dominate Australia A to win Quadrangular series