Ishant Sharma and Stuart Binny struck twice each while Umesh Yadav took one wicket as India reduced Sri Lanka to 47 for 5 at lunch on Day Three of the third Test against Sri Lanka at at Sinhalese Sports Club (SSC) Stadium, Colombo. Sri Lanka were unable to deal with life after Kumar Sangakkara, with a number of changes being made to the batting order. Upul Tharanga was sent out to open with Kaushal Silva, with Dimuth Karunaratne batting at No. 3 followed by Dinesh Chandimal and Angelo Mathews. However, by lunch only No. 6 Lahiru Thirimanne was in the middle.Live cricket scorecard: India vs Sri Lanka, 3rd Test at Colombo (SSC)

Ishant started the procession, as Tharanga edged him to KL Rahul at slip for 4. Silva was out three balls later, bowled while trying to leave one from Umesh. Chandimal came out with a lot of intent, hitting five boundaries in his 23 before falling LBW to Binny. Mathews then edged Ishant to Naman Ojha before Binny struck with the last ball before lunch, getting Karunaratne caught at slip by Rahul. Live cricket updates: India vs Sri Lanka, 3rd Test at Colombo (SSC), Day 3

Earlier, Rangana Herath picked up the last two Indian wickets to fall as India were bowled out for 312 early on Day Three. Cheteshwar Pujara, who was unbeaten on 135 off 277 deliveries overnight, became the fourth Indian batsman to carry his bat in a completed innings, remaining not out on 145. India came out with the aim to score as many runs as quickly as possible, which resulted in Ishant Sharma trying to slog Herath over the ropes. He missed the ball altogether and was bowled instead. Umesh Yadav was then bowled by Herath trying to play him off the back foot. READ: Cheteshwar Pujara emulates Rahul Dravid, Virender Sehwag, Sunil Gavaskar in India vs Sri Lanka, 3rd Test

S Badrinath: 11 facts about the run-hungry batsman who did not get his rightful due 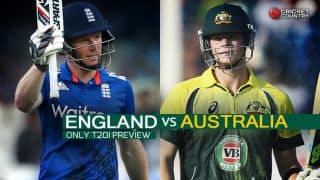 England vs Australia 2015, one-off T20I Preview: After attrition, it is time for muscle