The Indian pacers led by Zaheer Khan have reduced New Zealand to 87 for four.

The Indian pacers led by Zaheer Khan put New Zealand on the back-foot in the second Test in Wellington on February 16, 2014. New Zealand entered lunch on Day Three at 87 for four with Brendon McCullum batting on 14. They trail India by 159 runs in their second innings. Zaheer has taken three wickets so far and Mohammed Shami has got one.

The day began with New Zealand at 24 for one. In the second over of the day, Zaheer struck by dismissing Kane Williamson. He pitched one just outside the off-stump and made the ball go away slightly. Williamson pushed at it, but got a faint edge on his bat and MS Dhoni took a low catch behind the wickets. He was out for seven off 22 deliveries.

Ishant Sharma bowled a length delivery and Hamish Rutherford struck that through covers for a four. Tom Latham got his first runs in Test cricket with a back-foot push for two runs behind square on the off side.

Rutherford was in good form as he pushed a back of a length delivery from Zaheer through third-man for a four. He then hit a half-volley from Shami straight down the ground towards long-off for another four.

But Zaheer struck quickly by dismissing Rutherford. He bowled one outside off-stump and made the ball hold its line. Rutherford tried to defend it, but the ball took the outside edge of the bat and went through to Dhoni. Rutherford was out for 35 off 55 deliveries.

After that saw a period of slow scoring for New Zealand as Latham and McCullum tried to just spend time on the crease. Zaheer then bowled a short delivery and Latham top-edged a pull over Dhoni for a four. Zaheer again bowled a short delivery next ball, but this time Latham rocked back onto his back-foot and pulled it in front of square on the leg side for another four.

Ishant then drifted on the pads and McCullum flicked it away for a four through mid-wicket for his first four. Virat Kohli then missed a chance to instill further damage on New Zealand. Shami’s length delivery had just stopped a bit and McCullum hit the ball in the air.

Kohli was positioned at short mid-on and got to the ball with his left hand, but dropped the catch. But as lunch approached, Shami struck with the wicket of Latham for 29 off 64 deliveries. He pitched one on a back of a length outside off-stump and Latham pushed at it without much feet movement. He only managed to edge it to Dhoni.

With the fall of Latham’s wicket, the umpires called for lunch. New Zealand trailed India by 159 runs. 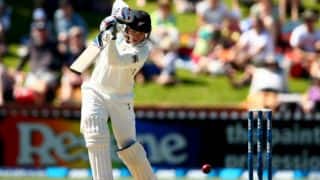 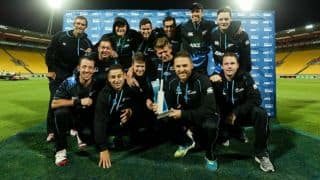