Andre Krog is all praises about Team India.

Team India are known to be an aggressive lot on the field, but off it, they continue to win hearts off the field. Despite suffering losses in the back-to-back Tests, Indian players have not behaved in unruly manner towards their unofficial support staff. One such personnel is South African Team’s bus driver, Andre Krog.

Krog speaking to cricketnext, discussed in details about his admiration for Team India. He says, “Not only do they (Indian team) treat their driver (Ronnie Moodley) with respect and welcome him to be a part of the team, they are the ones who ensure that I get my water bottles and cool drinks when we (Roonie and me) are waiting out in the sun as the team plays in the middle. Is it not basic courtesy to check if I need some water or something else? The Indian players are so warm that they gave the driver tickets to bring his friends and family and in fact, I used one of those as one of my friends wanted to watch the game.”

The above statement had come in after Krog lashed out at a certain South Africa support staff. He said, “I have been travelling around with these boys for a while and even though the players are fantastic chaps, there is one official around, who, if he had his way wouldn’t even like to consider me as human. It is surprising how even though the players will be warm towards me, this official has a problem with me. I have been asked why I walked into the team hotel in the morning one of these days to order coffee for myself. This, after I was told by the hotel that it was on them. To be honest, I didn’t know I didn’t even deserve a coffee after driving the players to the ground and back.”

When quizzed about him not asking for tickets from South Africa, Krog was quick to reply. He explained, “On some days, I am given my lunch coupon at 2pm when the man designated to hand the coupon realises that he had almost forgotten. So, you might as well realise how it is. I have my friends in the Indian team to help me out if needed.”

Unlike the Indian team driver, Krog fears not to don the South African jersey. What if he barred to do so as he isn’t a part of the team? 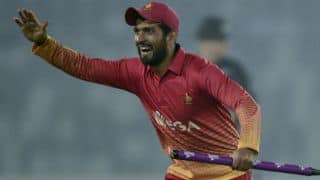