Rohit Sharma who has been criticised for his batting position, came to bat after the fall of first wicket.

Mumbai Indians (MI) posted 181 after being put in to bat by Kolkata Knight Riders (KKR) in the match 37 of Vivo IPL 2018. MI started off well with a 91-run opening partnership between Suryakumar Yadav and Evin Lewis. Rohit Sharma, who has been criticised for batting too low, came to bat after the fall of first wicket. The stage was perfectly set for him with Surya well set on the other end. However, his stay in the middle did not last longer as he was dismissed by Sunil Narine in the 12th over.

Rohit tried to slog-sweep Narina but top-edged to Rinku Singh in the deep. This was the sixth time Narine dismissed Rohit in the history of IPL. He became the second bowler to do so, after Vinay Kumar, who has also dismissed him the same number of times. Rohit has had an okayish season this IPL scoring 231 runs in 10 matches. 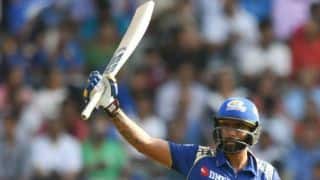