Ben Stokes fought hard for his 45 but could not cope up with the required run-rate.

Rajasthan Royals (RR) lost Match 17 of Vivo IPL 2018 by 64 runs. Chasing 205 against Chennai Super Kings (CSK), they folded for only 140. CSK registered their third win in the tournament in 4 matches to rise to the top of the points table. Ben Stokes fought hard for his 45 but could not cope up with the required run rate. The CSK bowlers never released the pressure; the RR batsmen lost several of their wickets to desperate strokes.

Heinrich Klaasen, who replaced D’Arcy Short today, opened batting with Ajinkya Rahane. Klaasen was dropped in the first over by Shane Watson at first slip. However, he did not make use of the lifeline: he was bowled by Shardul Thakur in the next over to a ball that kept low.

Deepak Chahar leaked 16 off his first over, but conceded only 16 more in his next 3. He also picked up the big wickets of Sanju Samson (2) and Rahane (16) in his second and third overs respectively. Samson mistimed a short-pitched ball while Rahane missed an attempted slog.

Jos Buttler (22) smashed 14 runs off Imran Tahir in the eighth over but was mistimed a pull in Dwayne Bravo’s first over. Tahir was the most expensive of the lot, but he took the important wicket of Stokes, for 45. Stokes mistimed a slog sweep.

Earlier in the match Shane Watson recorded his third IPL century and also the highest individual score in IPL 2018. Apart from Watson, contributions from Suresh Raina and Bravo guided CSK to a huge total of 204. Shreyas Gopal picked up 3 wickets for RR conceding only 20 runs off his 4 overs.

Player of the Match: Shane Watson. 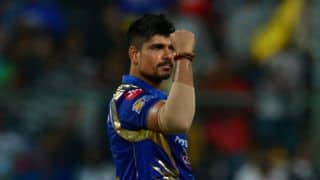