Williamson this week also played down comparisons with the hard-hitting Warner.

New Delhi: Kane Williamson, a last minute replacement for scandal-tainted David Warner as captain, was hailed Wednesday as the key to Sunrisers Hyderabad‘s domination of the Indian Premier League by coach Tom Moody. The 27-year-old Williamson has hit 410 runs and made brilliant tactical decisions as the Sunrisers have taken the IPL by storm winning eight of their 10 games. “Kane is a very astute captain. There is no secret in that either, we know what he has done with New Zealand,” Moody said ahead of his team’s away game at Delhi Daredevils on Thursday.

“Most people forget Kane’s not that old really when it comes to being around international cricket, but he has got a very wise head and he reads the game very well and he has managed our pressure situations really well.”

The demanding Moody also praised his own links with his skipper. “It’s great to have someone like Kane taking that responsibility. And from my perspective it has been terrific because we have formed a strong partnership which I think is important in regards to our planning for matches, reviewing matches and moving on as quickly as possible,” said the former Australia batsman.

Fallen Australian star Warner led Sunrisers to their only IPL title in 2016, but Moody said the two cannot be compared. “Every leader has a different captaincy style. David Warner was a very succesfull captain for us for the last couple of years. He has got a trophy to his credit,” said Moody.

Williamson this week also played down comparisons with the hard-hitting Warner, banned for a year by Australia over his involvement in a ball tampering scandal in South Africa.

“I don’t think it’s a matter of replacing David Warner. I think that’s probably an impossible thing to do. He is one of the best T20 batters in the world and for this franchise in the last few years,” said Williamson.

Sunrisers, with four games left in the league stage, are close to becoming the first team to book a place in the IPL’s final four. This year’s seven week tournament has $8 million in prize money, including $4 million for the team crowned champions at the May 27 final in Mumbai. 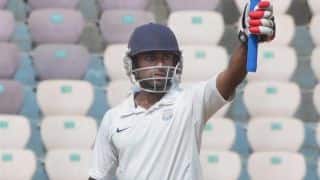