Delhi Daredevils were handed a 6-wicket defeat by Kings XI Punjab at Mohali earlier in the season.

Delhi Daredevils (DD) revamped their side, and brought in the aggressive pair of former Australia captain, Ricky Ponting, and Kolkata Knight Riders’ former skipper, and local lad, Gautam Gambhir ahead of Indian Premier League (IPL) 2018. However, they are still languishing in the bottom two after Match 21 of the current edition. To remind the readers, they haven’t qualified for playoffs since IPL 2012. With one victory and four defeats, DD turn to their home ground for the first time in the season; in a bid to resurrect their campaign at the earliest. They have a humongous task to stop table-toppers, Kings XI Punjab (KXIP) at home yet to be called as their fortress.

DD and KXIP have played each other once in ongoing IPL 2018. In the previous encounter, DD got off to a good start courtesy Gambhir. He didn’t get much support but got starts from Rishabh Pant and Chris Morris. KXIP’s Mohit Sharma and Mujeeb Ur Rahman choked the run-flow, and shared four wickets in between. An impressive death-overs bowling restricted DD to 166 for 7. In reply, KL Rahul slammed the fastest IPL fifty and sealed the match then and there. The finishing touch was provided by Karun Nair’s fifty, along with contributions from Marcus Stoinis and David Miller.

At present, KXIP have everything going for them. They have a smart bowling lineup, and well complimented by in-form openers: Rahul and Chris Gayle. If DD can negate Gayle-storm, it can bring in some new challenges for the middle order. From DD’s perspective, they urgently need to address their team balance. They lack a mystery bowler, and should ideally play Nepal’s Sandeep Lamichhane. Gambhir, Jason Roy, Glenn Maxwell and Chris Morris need to stand and deliver. Rahul Tewatia, Shreyas Iyer and Pant have shown the way, and others need to step in.

Ferozshah Kotla will host their first game of IPL 2018. It would be interesting to see the kind of surface demanded by the hosts. With back-to-back defeats, they would be hurt and eager to make amends. However, overall head-to-head record and current form keeps KXIP ahead. In 20 encounters, KXIP have won 12 and lost 8. A stiff task ahead for Gambhir and co. 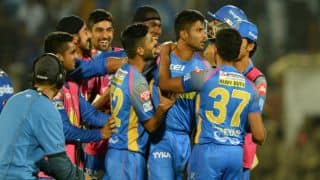