The Royal Challengers Bangalore(RCB) bagged him in IPL 2018 auction for INR 3.2 crores.

Washinton Sundar came into limelight in 2017, when he was roped in by Rising Pune Supergiants (RPS) as a replacement for Ravichandran Ashwin who was out of the league due to sports hernia. He had created a lot of buzz because of his name and jersey number 555. In a conversation with Sportskeeda, Sundar revealed the secret behind his jersey number.

“I was born on 5th of October at 5:05 AM. So, I decided to go with 555 as my kit number, said Washington. In the last season he picked up eight wickets in 10 matches with an impressive economy just over 6. He had won the man of the match in the first qualifiers against Mumbai Indians.

The Royal Challengers Bangalore(RCB) bagged him in IPL 2018 auction for INR 3.2 crores. In match 11, Rajasthan Royals(RR) posted a the highest total in Vivo IPL 2018 against RCB. Sundar did not take any wicket but maintained second best economy(7.50) and fought hard hitting 35 from 19 in the end overs. His innings included of one four and 3 sixes. RCB eventually lost the match by 19 runs.

In recent times, Sundar even made his debut in the international team. He has so far picked up nine T20I wickets with an economy of under 6. 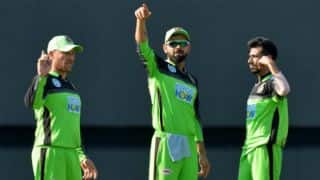