Nitish Rana has so far scored 165 runs and picked up four wickets for Kolkata Knight Riders (KKR) in the Vivo IPL 2018. He was bagged by KKR for INR 3,4 crores in IPL 2018 auction. KKR head coach, Jacques Kallis today said they always backed the Delhi youngster fully and it is paying off.

“We had given him a message that he will be a settled member in the side and he just needs to showcase his talent. We are backing him 100 per cent and certainly it has paid off,” Kallis said of Rana who has got two Man of the Match awards this season.

It was during their first leg match against Mumbai Indians in Mumbai last year when KKR spotted Rana. Coming to bat one down, Rana smashed a 29-ball 50 to help MI secure a four-wicket win and was awarded Man of The Match.

“He played well against us in Mumbai. We had heard some good things about him but perhaps didn’t get as many games for MI as he would have liked. He certainly has got a bright future with KKR,” Kallis said.

Having lost to Kings XI Punjab by DLS method on April 21, KKR have slipped to third place, two points behind leaders Chennai Super Kings (CSK) and Kings XI Punjab in the league standings. They next take on Delhi Daredevils (DD)in the return leg fixture on April 27.

“We are in the mid table now, the other end would not have been nice. We have played some good cricket. It’s nice to get a few days off and regroup in Delhi and hope to return to winning ways,” Kallis said as the KKR team enjoyed a day’s break playing golf for charity.

Andre Russell pulled his hamstring during their match against KXIP but assistant coach Simon Katich said the Jamaican will be fit and fine.

“We rely on Andre because he will be fit,” he said of Russell. 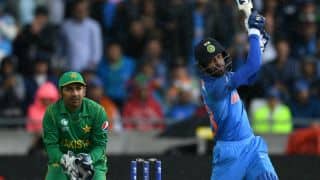