Mumbai Indians (MI) have kept their hopes alive in the Vivo IPL 2018 by defeating Kings XI Punjab (KXIP) by 3 runs in Match 50. MI managed to post a fighting target of 186 after being asked to bat first. Kieron Pollard, back in the team in place of JP Duminy, registered his first half-century of the season. Andrew Tye became the first bowler to pick up 3 four-wicket hauls in a single IPL season.

While chasing, KL Rahul fought out of his skin with 94, but failed to take his team home. MI showcased a fine exhibition of death-bowling with Jasprit Bumrah leading the show. Bumrah picked the important wickets of Aaron Finch (46) and Rahul to keep MI afloat. In the post-match presentation, Bumrah talked about what makes a quality death bowler: “Clarity is very important when you bowl at the death. That’s what I look for. When I’m clear, it’s easier to execute. Plans don’t change at the last moment when you run in. If you’re changing at the last moment, that means you’re not clear.”

Rahul has been in great touch this season. He regained the Orange Cap, and is 70 clear of anyone else. Bumrah spoke on his plans for Rahul: “He’s batting really well since the start of the season. Difficult to bowl to someone like that. But I backed myself. Knew his wicket was very important. On this wicket, slower ball was not gripping that much from a good length due to the dew. So I was trying to bowl the dipper and I was able to execute so it was a good day.” 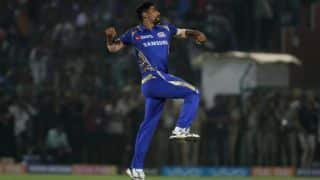