Duminy made his IPL debut in 2009 playng for MI against Chennai Super Kings (CSK).

JP Duminy playing his 79th IPL match completed 2,000 runs playing for Mumbai Indians (MI) against Royal Challengers Bangalore (RCB) in the match 31 of Vivo IPL 2018. Duminy made his IPL debut in 2009 playing for MI against Chennai Super Kings (CSK). He has played for four IPL franchise so far.

Chasing 168, Duminy came to bat at number three after the wicket of Ishan Kishan in the first over. He was only seven run short of reaching the landmark before the match. However, he has to play a responsible knock today to win it for MI. MI have had a poor start to the season having won only two games so far.

Duminy has hit 14 half-centuries till now in his carer. He was bagged by MI for his base price of INR 1 crore. However, he had to wait for his chance to play. He got a game against CSK in the match 27 when he replaced Kieron Pollard. 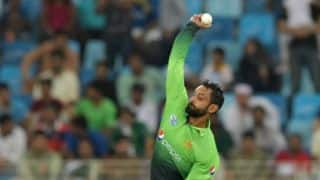