The win propelled Hyderabad to the top spot on the points table ahead of Chennai.

Jaipur: Sunrisers Hyderabad captain Kane Williamson reckoned that both batting and bowling clicked for them as they registered a 11-run win over Rajasthan Royals to jump to the top spot of the Indian Premier League (IPL) on Sunday. Electing to bat first, Hyderabad rode on excellent batting by Kane Williamson (63 off 43) and debutant Alex Hales (45 off 39) to post 151/7 in their 20 overs. “The contributions from the batting order to get 150 on that surface, was certainly a par total. The surface was on the slow side, and there was not much bounce. I thought the way they bowled the short ball was pretty good, and it’s something we wanted to do in our bowling innings,” Williamson said at the post-match presentation ceremony.

“We didn’t get the 10-15 more on a challenging surface, but it was an improvement nevertheless.” In reply, Rajasthan could only manage to reach 140/6 despite a 59-run second-wicket stand between Ajinkya Rahane (65 not out) and Sanju Samson (40) setting up the chase. However, Hyderabad bowlers rallied to restrict the hosts. In the past two matches, Hyderabad have defended small totals like 132 against Kings XI Punjab and 118 against Mumbai Indians.

Siddhart Kaul returned figures of 2/23 to emerge as the most successful among the visiting bowlers. Sandeep Sharma, Basil Thampi, Rashid Khan and Yusuf Pathan also bagged a wicket each. “We knew that if we were able to squeeze well, like we have done in the last couple of games – we certainly back our bowlers — we would make life difficult,” New Zealander Williamson said. “They did get off to a good start and put us under pressure but we were able to bounce back in that second half of bowling.”

Williamson admitted that he took a gamble by letting part-time off-spinner Yusuf Pathan bowl against dangerous batsman Ben Stokes and Rahane in the 11th over. “Yusuf’s wicket was lucky, but it was a good wicket at that stage because Stokes is a dangerous player,” he said. Williamson was also pleased with English opening batsman Hales, who scored 45 on debut. “Alex is world-class in this format. He made a very good contribution today,” he said.

The win propelled Hyderabad to the top spot on the points table. The visitors rose one rung, displacing Kings XI Punjab to the third position.

“Twenty20 is unpredictable in nature and it’s nice to get a few wins on the board,” he concluded. 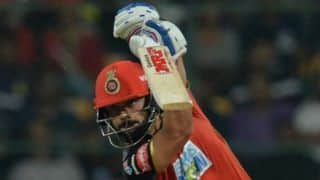