Into the second week of the tournament, SRH have displayed the best brand out of all teams.

At the start of the VIVO IPL 2018, Sunrisers Hyderabad (SRH) received a serious blow when their skipper David Warner was banned from the tournament. Into the second week of the tournament, SRH have displayed the best brand out of all teams. They have won everything. Skipper Kane Williamson won 3 tosses and the matches too. In Match 16 of the tournament, they travel to Mohali to face Kings XI Punjab (KXIP).

KXIP have had a mixed run. They beat Delhi Daredevils (DD), lost to Royal Challengers Bangalore (RCB) before surviving a MS Dhoni storm and securing a win against Chennai Super Kings (CSK). They have managed to sneak in Chris Gayle at the top of the order and that paid dividends against Chennai. KL Rahul continues to be in good form and Mayank Agarwal is getting the desired starts.

Their concern lies in the middle-order. Aaron Finch has got back-to-back golden ducks and Yuvraj Singh‘s form has not been the best. Manoj Tiwary has been warming the benches and that comes as a surprise. He was in exceptional touch in last season and also in domestic cricket.

SRH have nothing to worry about. They are a well settled team and moving ahead well. They will be tempted to play Sandeep Sharma, a man who knows the conditions well, playing his domestic cricket for Punjab and having spent five seasons with KXIP. However, it is difficult to find a spot considering the fact that Siddarth Kaul has done well.

In another game, it will be the battle of Afghan teen sensations. Rashid Khan will square off against Mujeeb Ur Rahman.

With 3 wins from as many games, SRH hold the edge. They have been phenomenal with the ball and their batters have complemented their bowlers. It will be key for KXIP to target SRH’s batting and stifle them. Head-to-head, SRH have won 8 out of 10 matches against KXIP. Barring the 2014 season, SRH have won all their encounters. The balance is heavily weighted in favour of SRH. 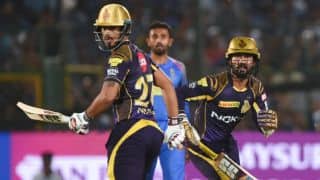