Billed as one of the most watched games, Mumbai Indians (MI) took on Kolkata Knight Riders (KKR) in Match 37 of VIVO Indian Premier League (IPL) 2018. At a hot and humid Marine Lines, Suryakumar Yadav once again shone for Mumbai, scoring a quick-fire 59. However, it was Sunil Narine and Andre Russell, who cramped down the hosts march, picking 4 wickets between them to restrict Rohit Sharma-led side to 181 for 4 .

Suryakumar started off his innings in style, smacking Mitchell Johnson for 15 runs after Nitish Rana and Prasidh Krishna bowled a couple of tight overs. Evin Lewis joined in the festivities as well, hitting Sunil Narine for back-to-back boundaries.

The pair soon reached 50 runs in 32 balls, with Lewis hitting Piyush Chawla for a four on the off side. Both batsmen matched each other shot for shot, in their 91-run stand for the first wicket. It was Andre Russell s introduction into the attack, which gave KKR their first success. Lewis handed a simple catch to Chris Lynn at third man for 43.

Most runs in IPL by uncapped players:

Narine was called in to bowl, with KKR looking for wicket and he got rid of Rohit instantly; sixth time in IPL. Rohit played the slog sweep and handed Rinku Singh an easy catch at deep mid wicket.

Hardik Pandya came out at No.4. With heat taking its toll on Suryakumar, he played a nothing shot off Russell and fell for 59. Man in form, Krunal Pandya came out in the middle. Pandya brothers joined forces and added 24 runs in quick time to take Mumbai past 150-run mark.

Krunal was the first to depart, after pulling one straight to Shubman Gill off Narine. JP Duminy came ahead of Ben Cutting. Hardik played a crucial cameo of 35 not out, while adding 30 with Duminy (13) for the fifth-wicket stand. 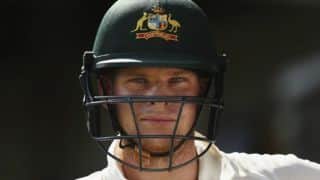 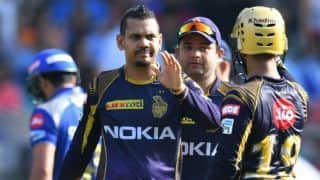