Chasing 176, Kolkata Knight Riders (KKR) prevailed over Royal Challengers Bangalore (RCB) by 6 wickets, in Match 29 of ongoing VIVO IPL 2018, at M Chinnaswamy Stadium, Bengaluru. This way, KKR remain unbeaten versus Virat Kohli-led RCB for fourth time in a row. The chase was nicely set up by Chris Lynn. He added 59 stand with opening partner Sunil Narine in 43 balls. They duo attacked from the very beginning, trying to cash in on the Powerplay overs as much as possible. Narine took his chances, while Lynn was more calculating the party as well.

Play was stopped for half an hour due to rain, though it did not result in a loss of overs. Narine fell soon after resumption: Murugan Ashwin tossed it up nicely outside off stump, and Narine was caught by Colin de Grandhomme at the deep. Murugan got reasonable turn, but Robin Uthappa played him really well. Uthappa looked to hit straight and played with the turn instead of taking undue risks.

Lynn, on the other hand, wasn’t at his aggressive best. He repetitively swept the spinners to negate any turn. It was his uncharacteristically calculative half-century that kept KKR in the hunt. Uthappa got to another start, only to perish for a 21-ball 36. Murugan accounted for his fall too.

RCB got some tidy overs between 14 and 16, from Chahal, Tim Southee and Murugan respectively. Nitish Rana’s injury (one that forced him to leave) left KKR in a spot of bother. They lost birthday boy Andre Russell for a golden duck. In the end skipper Dinesh Karthik’s streetsmart approach, along with Lynn’s belligerence, ensured KKR their fourth win of the tournament.

DK and Lynn ran hard between wickets and got the regular boundaries. The winning shot came from young Shubman Gill. RCB paid the penalty for dropping Lynn on 7. He ultimately took his side home with 5 balls to spare, scoring 62 off 52 balls.

Earlier, RCB were put into bat. Quinton de Kock and Brendon McCullum set the platform with a fifty-run stand. Kohli anchored the innings with an unbeaten, fluent 68. He was ably supported by Mandeep Singh (19). For KKR, Russell ended with 3 scalps.

KKR move to fourth spot in the table with 8 points, while RCB remain in the bottom half (4 points). 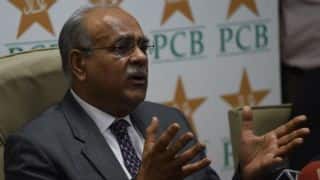