Match 33 of ongoing VIVO IPL 2018 is halfway through. Put into bat, Chennai Super Kings have posted 177 for 5 versus hosts, Kolkata Knight Riders (KKR) at Eden Gardens, Kolkata. CSK got off to a good start courtesy Shane Watson, Faf du Plessis and Suresh Raina. However, their middle order conceded the momentum ahead of the death overs. Skipper MS Dhoni (43* in 25 balls) took them to a respectable total, but it will seriously test the CSK bowlers.

Watson and Faf looked to attack from the onset. They put the bad balls away and did not hesitant to take risks. Faf was comparatively more attacking than his previous outing, against Delhi Daredevils (DD), while Watson preferred to hit them straight and very hard.

After Faf’s dismissal, Raina and Watson kept the run rate above 8. Raina, who averaged over 50 against KKR before today, commenced with boundaries and kept rotating the strike. While Kuldeep Yadav and Sunil Narine went for occasional boundaries, Andre Russell and Mitchell Johnson were hammered.

Narine and Kuldeep got two important breakthroughs in the middle overs. Narine dropped one short; Watson went for the big shot but could only hit to deep mid-wicket. Kuldeep, on the other hand, accounted for Raina’s scalp with a well-flighted delivery outside off.

Dhoni and Ambati Rayudu got together and threatened to dominate again. The duo has complied some impressive stands in the current season but couldn’t do much this time. Rayudu reclaimed the Orange Cap from Rishabh Pant but departed for 21.

In a bid to turn the heat on in the death overs, Dhoni shifted gears after taking on young Shivam Mavi. Mavi bowled well earlier in the day but was too predictable for the experienced Dhoni. Dinesh Karthik brought on his spin troika, but they could not get Dhoni either. He hit ferociously and ended with 4 sixes, though Shubman Gill dropped a regulation catch to give him a reprieve. In the end, CSK rode on Dhoni’s knock and managed 31 in the last 3 overs. 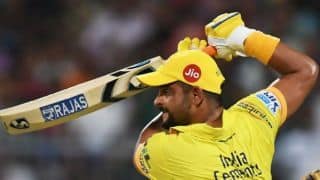 India, India A squads for England, Ireland, Afghanistan to be announced on May 8