Match 36 of VIVO IPL 2018 saw Sunrisers Hyderabad (SRH) edge past Delhi Daredevils (DD) in the penultimate ball of the contest. In pursuit of 168, SRH openers had laid the foundation before the finishing touch was provided by skipper Kane Williamson (32*) and Yusuf Pathan (27*). Williamson s rich form ensured SRH their seventh victory and pushed them to top spot, ahead of Chennai Super Kings (CSK), while things are looking bleak for DD.

SRH’s victory was founded on yet another match-winning spell from Rashid Khan. Playing his 100th T20, Rashid’s 2 for 23 restricted DD to 163 for 5. At halfway stage, DD were cruising at 95 for 1. Rashid, well complimented by Siddarth Kaul, pulled things back at the death.

In the post-match conference, Williamson decoded SRH’s success story: “I don’t think there’s any secret (to success). Adapt to the surfaces. We were on a different one again. Both teams used the new ball well. We came back really well (with the ball). In terms of getting more runs, they looked like they would. It was nice to restrict them under a par score. The bowlers responded well. We knew that the middle overs would be tough. Those PP (Powerplay) overs, was extremely important. It was great that he [Hales] was able to give a good start. He (Pathan) hits the ball really well. We still have too many games left. Today was a good team performance, not perfect.”

Note: SRH scored 61 runs without any loss of wicket in the first 6 overs. This is now their highest Powerplay score in IPL 11.

Williamson’s personal form has been top notch. Not only has he been proactive as skipper, Williamson has taken maximum responsibility of handling a weak lower order by holding one end. He did the same in today’s chase. DD, on the other hand, missed a few tricks by keeping Trent Boult’s overs till the death. Sloppy fielding did not help their cause, either. 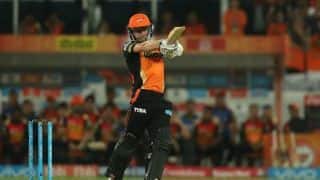 IPL 2018: Rashid Khan feels he is playing in Afghanistan