Match 38 of ongoing VIVO IPL 2018 is done and dusted. In pursuit of 153, Kings XI Punjab (KXIP) edged past Rajasthan Royals (RR) by 6 wickets to pull off their sixth victory of the season. KXIP were made to work hard in the run-chase, but in-form KL Rahul‘s 84* made the difference. With back-to-back defeats, RR continue to struggle at the bottom and need to revamp soon to feature in the playoffs.

153 wasn’t supposed to be a big challenge for KXIP. After all, the aggressive opening pair of Chris Gayle and Rahul have delivered time and again. However, Universe Boss perished soon. Jofra Archer got rid of him to raise his side’s confidence early on.

Mayank Agarwal’s batting position was again shuffled. Promoted to No. 3, he had a chance to make a mark, but he fell to Ben Stokes cheaply. Meanwhile, Rahul looked composed, playing every ball according to its merit and keeping the asking rate under control. He added 50 runs for the third wicket with Ranji teammate Karun Nair (31). Just when Nair was getting into the groove, he pulled a short delivery off Anureet Singh to find the fielder.

Akshar Patel came to bat ahead of Marcus Stoinis. However, the move paid no dividend. RR were in the hunt with KXIP needing 51 off 30 balls. Barring Anureet, the bowlers were mostly economical, but none of them could get Rahul.

Rahul found an ally in Stoinis, who smacked a few boundaries early and took the pressure off his partner. At the other end, Rahul stayed innovative and manipulated the field to keep KXIP ahead. There was hardly a false shot from him. Eventually, his highest IPL score took the side home with 8 balls to spare.

With 2 points, KXIP occupy the third spot in the table. RR, on the other hand, remain at the bottom. 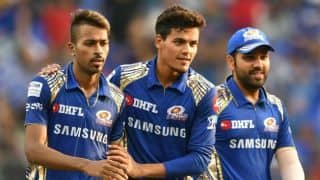 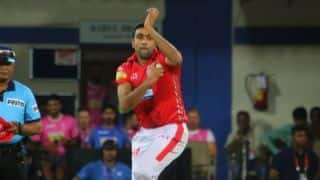