Match 38 of VIVO IPL 2018 is halfway through. Opting to bowl, Ravichandran Ashwin-led Kings XI Punjab (KXIP) restricted Rajasthan Royals (RR) for 152 for 9 in 20 overs. While Rashid Khan prevailed over Delhi Daredevils (DD) last evening, another Afghan stole the show in the ongoing clash in Indore. Mujeeb Ur Rahman’s 3 for 27, well complemented by others, has made hosts favourites ahead of a moderate chase. From RR’s perspective, only Jos Buttler (51) held the innings till his stay in the middle.

After their onslaught against DD, Buttler and D’Arcy Short opened the innings once again. Ashwin bowled aggressively, tossing the ball up and bowling slowly through the air, inviting Short to go over the top. Short gave in, went for the big hit, and was dismissed in the first over. Skipper Ajinkya Rahane, at No. 3, found backward point in an effort to hit out. Chris Gayle, in complete contrast to his easygoing image, pulled off a stunner that won accolades from commentators.

Buttler found an able partner in Sanju Samson. The duo kept the scoreboard ticking, picking up the odd boundary. Samson even attacked Ashwin, but fell to Andrew Tye. Against the run of play he pulled straight to deep fine-leg.

Ben Stokes’ struggles continued before he went for the glory shot off Mujeeb. Mayank Agarwal caught him on the straight boundary but lost balance. Realising that he would run over the rope, he parried the ball to Manoj Tiwary, who completed the catch.

From 106 for 4 in 14 overs RR slipped to 114 for 7. Buttler nicked one to the wicketkeeper, and Jofra Archer was dismissed for a golden duck. Mujeeb got both the breakthroughs, coming on the verge of claiming the first hat-trick of the season.

Shreyas Gopal and Rahul Tripathi then pushed the total beyond 150. Meanwhile, Ankit Rajpoot and Akshar Patel got a wicket each, while Tye put a hold on the run-flow. KXIP should walk past RR, given KL Rahul and Chris Gayle’s ominous form. 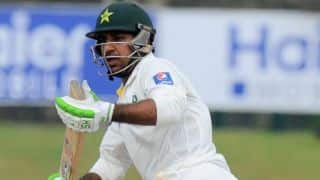