Royal Challengers Bangalore (RCB) and Sunrisers Hyderabad (SRH) have a history of producing nerve-wrecking encounters in the past. In Match 39 of ongoing VIVO IPL 2018, RCB bowlers and fielders had set up the match beautifully by dismissing SRH for 146. In reply, SRH, led by another collective bowling effort, gained early advantage with tidy overs and key breakthroughs. Colin de Grandhomme and Mandeep Singh looked set to take RCB out of jail, but was denied a victory courtesy Siddarth Kaul and Bhuvneshwar Kumar’s exceptional death bowling.

Parthiv Patel commenced RCB’s chase nicely. He played naturally, picking up the odd boundary. Kane Williamson introduced Shakib Al Hasan. The move paid off: after a few boundaries, Parthiv was trapped lbw for 20. RCB skipper Virat Kohli came out with a positive intent. He wanted to maximise the Powerplay overs, and played some delightful strokes.

Kohli started with a signature cover drive off Bhuvi before opening up against Shakib. At the other end, being away from strike did not suit Manan Vohra. He chopped one on to the stumps off the miserly Sandeep Sharma.

AB de Villiers wasn’t in his elements and was kept at bay was Rashid Khan. Meanwhile, in Kohli and Rashid’s first face-off. Kohli got two reprieves off Rashid: Kaul dropped a regulation catch, whereas Williamson grassed one at first slip.

Kohli’s luck didn’t carry on for too long. A miscued shot off Shakib flew to Yusuf Pathan at third-man, who pulled off a terrific catch. AB failed to read a googly but somehow managed to keep it out. Rashid bowled another googly, AB didn’t read again, and was bowled.

Moeen Ali couldn’t last long as well. A thick edge off Kaul was cleanly taken by Wriddhiman Saha. At 84 for 5, it was SRH’s game to lose.

De Grandhomme and Mandeep, RCB’s last recognised batsmen, were kept under check for few overs. Williamson might have missed a trick by not completing Rashid’s spell early into the partnership. The pair got their eye in, worked the ball around, and got the occasional boundary to keep RCB in hunt. Rashid finally bowled the 17th over but went for plenty.

De Grandhomme took his chances off Rashid and succeeded. With 19 required off 12 balls RCB were ahead, but SRH had an over each from Kaul and Bhuvi. In the end, that proved to be the difference: both the bowlers were right on the money, and showed their experience. With 6 to score off the last ball, de Grandhomme shuffled and attempted a heave but was yorked.

RCB failed to live upto expectations under pressure. Their campaign is as good as over. Meanwhile, SRH reclaimed the top spot with 16 points.

Player of the Match: Kane Williamson. 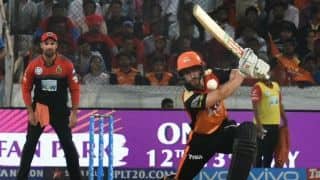