Sunrisers Hyderabad (SRH) have posted 179 for 4 against Chennai Super Kings (CSK) in Match 46 of VIVO IPL 2018. The ball moved quite a bit till the first half. As a result, SRH were only 62 for 1 after 10 overs. MS Dhoni bowled out Deepak Chahar to get most out of the latter’s swing-bowling abilities. Chahar finished with excellent figures of 4-0-16-1.

The script changed dramatically after the 10th over, when the ball lost its shine. Shikhar Dhawan and Kane Williamson, coming off a mammoth 176-run stand against Delhi Daredevils (DD) in their previous outing, carried on in similar fashion and upped the ante. CSK managed a few wickets in the end, but have a formidable total to chase against ‘defending’ champions SRH.

Alex Hales and Dhawan opened batting after Dhoni elected to bowl. Chahar, returning from injury, provided the early breakthrough. Hales, offered width outside off, slashed hard, only to find Suresh Raina at cover-point. The field placement was on target.

The duo definitely know each other’s game, and complement their contrasting styles. Dhawan treated everything outside off with caution, remaining content in leaving the ball even in the 9th over. However, whenever anyone Harbhajan Singh, Ravindra Jadeja or David Willey erred in line, Dhawan pounced upon them. For some reason Willey decided to persist with cross seam despite the assistance from the conditions. It did not work, and he went for 24 in 2 overs..

Williamson, on the other hand, extended his purple patch and moved up the ladder in the Orange Cap list. He was slow to get off the block today, but remained content with rotating strike against the pace battery. He later opened up against spinners, and manipulated the field brilliantly.

Note: Dhoni probably missed a trick by not persisting with Shane Watson on a pitch with good movement.

Cannot keep Bravo out of action

Dwayne Bravo was hammered by Dhawan. At one point Dhawan even seemed to be storming towards a maiden IPL century. However, Bravo’s change of pace did the trick: Dhawan, not reading the alteration, went for a cheeky ‘lap’ and the ball looped to Harbhajan at short fine leg.

Shardul Thakur removed Williamson after the second Strategic Timeout. Williamson sliced one outside off but could not keep it down. Bravo, covering some distance, took a blinder in the deep, giving CSK 2 wickets in successive balls.

If Dhawan and David Warner had done the bulk of scoring for SRH in the previous editions, this season has been all about Williamson and Dhawan (including some cameos from Yusuf Pathan). The rest have not stood up as a unit.

This time the onus fell on Manish Pandey and co. after the fall of the third wicket. They found the odd boundary but couldn’t maximise the platform set by Dhawan and Williamson.

In the end, SRH managed only 38 in the last 4 overs. If CSK’s bowling remains their weakness, so does SRH’s erratic lower order.

Will CSK prevail in the clash of the titans? 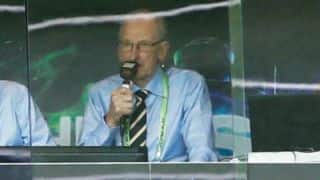