In Match 54 of VIVO IPL 2018, Sunrisers Hyderabad (SRH) have posted 172 for 9 in 20 overs against Kolkata Knight Riders (KKR) at Uppal. When play resumes during KKR’s chase, SRH will be eager to proceed to Qualifier 1 with a winning momentum. On the other hand, KKR will strive for the victory that will seal the third Playoffs spot for them though they may even make it with a defeat.

The innings commenced with SRH trying out a new opening pair, Shikhar Dhawan and Shreevats Goswami. The run-flow stepped up after a couple of overs. Andre Russell’s 20-run third over changed the momentum in SRH’s favour. His line and length were too predictable, and Goswami hammered him all around. Dhawan was elegant as ever, pouncing on anything even slightly off target. He also freed his arms whenever there was width on offer outside off. The KKR bowlers couldn’t get Dhawan to edge a single one.

Goswami perished for 35 completely against the run of play. Kane Williamson, with innovative shots and impeccable timing, was on course for his ninth fifty of the tournament. He was striking at over 200 before he found the fielder at deep cover. Jason Searles could have removed Dhawan as well but Sunil Narine made a mess of the catch. Searles got Williamson instead.

The scoring rate came down a bit after Dhawan’s thick edge off Prasidh Krishna. It became too much of a task for a rusty Manish Pandey, who nevertheless added some valuable runs down the order. SRH were cruising towards 190.

The last over, by Krishna, pulled SRH back. He got Pandey with his first ball; then, after a dot and a four, Shakib Al Hasan with his fourth and Rashid Khan with his fifth. Bhuvneshwar Kumar was run out off the sixth. SRH scored 7 for 31 off the last 5 overs including 4 for 4 in the last.

To confirm a spot in the top four, KKR need a win here. Else, they need to avoid a defeat in excess of 40 to prevent slipping behind No. 4 ranked, Rajasthan Royals (RR). 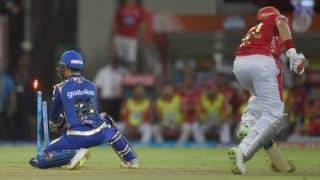