The league stage of VIVO IPL 2018 is over. In the last tie (Match 56), Kings XI Punjab (KXIP), defending 153, had to dismiss Chennai Super Kings (CSK) to 100 or fewer to stand a chance for qualification, but Suresh Raina’s unbeaten half-century crushed their hopes. Despite some bizarre batting-order changes, CSK crossed the finish line to do a big favour to Rajasthan Royals (RR). RR and CSK making a comeback in IPL after two years are both in the final four.

Chasing 154, CSK didn’t get off to a good start. The in-form Ambati Rayudu perished early to an edge off Mohit Sharma. Then Chris Gayle caught Faf du Plessis inches from the ground with a reverse cup and insisted on a review. Faf was given out. Ankit Rajpoot bowled Sam Billings with a jaffa next ball: it moved just a bit more to edge past Billings’ defence.

CSK, for reasons best known to them, then shuffled their batting order. Harbhajan Singh came out at No. 5 to prevent the hat-trick and was dropped at slip second ball, by Aaron Finch. Harbhajan did get some freebies but eventually departed for a painstaking 22-ball 19. He was leg-before, trying to go after Ravichandran Ashwin.

Deepak Chahar, with 99 runs in 34 T20s and a career-best of 20 till today, was next in. He looked better than Harbhajan, and even dominated a 66-run stand with Raina. While Raina failed to get his timing right, Chahar took on Ashwin and smacked some glorious shots, eventually falling for a 20-ball 39. He ensured KXIP’s exit from the tournament.

Note: KXIP become the first side in IPL history to miss the Playoffs despite winning 5 of their first 6 encounters.

The rest of the show was carried by MS Dhoni and his deputy, Raina. Dhoni, completing 4,000 IPL runs, smashed a humongous six to seal the show. Meanwhile, Raina looked rusty but carried the bat to anchor the innings. This knock would do a world of good for the southpaw ahead of Qualifier 1 (against Sunrisers Hyderabad).

Player of the Match: Lungi Ngidi. 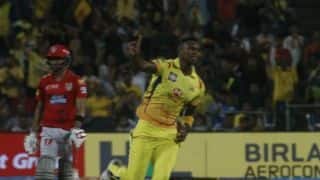 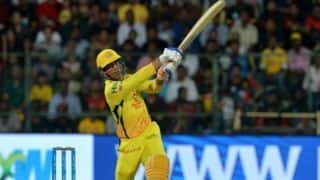