Sunrisers Hyderabad (SRH) recorded the lowest total of Vivo IPL 2018 scoring only 118 after being put to bat by Mumbai Indians (MI).

Sunrisers Hyderabad (SRH) recorded the lowest total of VIVO IPL 2018 scoring only 118 after being put to bat by Mumbai Indians (MI) in match 23. MI displayed a good bowling performance bowling visitor’s out under 20 overs. SRH were four down after six overs for 51 runs. This was the first time any team lost four wickets in Powerplay in IPL.

Shikhar Dhawan, who made his comeback after missing one game, was bowled by Mitchell McClenaghan in the second over. In the same over, he got rid of Wriddhiman Saha, who nicked the ball to wicketkeeper Ishan Kishan. Manish Pandey, who started well, found Rohit Sharma at covers off Hardik Pandya.

Kane Williamson, the top-scorer in previous match against Chennai Supper Kings (CSK) stood tall with wickets falling at other end, but could not get going. He was out to Hardik in the ninth over. However, in the process he achieved the orange cap with 259 runs.

Yusuf Pathan, who found form in last match fought hard with a innings of 29, failed to take SRH’s total to a competitive one.

Mayank Markande regained his purple cap in the process after dismissing Mohammad Nabi and Basil Thampi for 14 and 3 respectively. Pandya and McClenaghan too two wickets apiece. 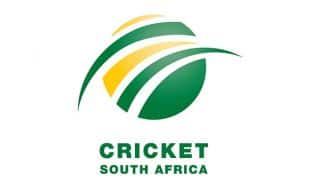