MI however hold a poor record at home having won only two off their five games and with very minor chances of survival they will put their all in.

The match 50 of Vivo Indian Premier League 2018 (IPL) will see Mumbai Indians (MI) lock horns with Kings XI Punjab (KXIP) in their own backyard at Wankhade stadium. MI, however, hold a poor record at home having won only two off their five games this season. With very minor chances of survival they will put their all in. They have won 11 out of their 21 games against KXIP in IPL so far.

In their last encounter at Indore, MI restricted KXIP to 174 after opting to bowl. While chasing it, Suryakumar Yadav provided MI with a good start, scoring 57 off 42. KXIP bowlers had kept things tight till the point Krunal Pandya started smashing the ball to every corner of the ground. His cameo of 31* off 12 helped MI win the match with an over to spare.

Both the teams have lost their last matches. However, KXIP lost miserably against Royal Challengers Bangalore (RCB), going down by 10 wickets after getting bowled out for 88. Umesh Yadav with his extra pace picked up three wickets. It was Parthiv Patel and Vorat Kohli who did the rest for RCB as they chased the total down under 9 overs. MI, on the other hand, failed to defend 168 against Rajasthan Royals (RR) as they were taken off an impressive innings by Jos Buttler who registered his fifth consecutive half-century to take RR home. Buttler scored 94* off 53 to make qualification harder for MI.

The strength for both the teams is the form of their opening batsman who have been performing consistently. MI, who bat very deep, have often lost momentum after losing their openers. Rohit Sharma‘s batting position still holds as a major concern for them. MI also lack experience in the spin department. KXIP have also had middle order concerns. However their bowling department seems well balanced with both spin and pace attack.

The game will be a high scoring one due to the form of the openers and power-hitters like Chris Gayle and Aaron Finch. MI may opt for Kieron Pollard instead of Ben Cutting because of the situation they are in. Pollard has a knack of picking up his game in crunch games. However, KXIP will be low on confidence with the show they put in their previous game as MI stand as favourites playing at home. 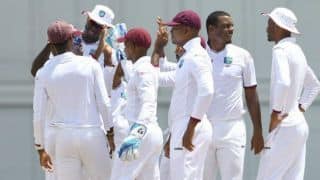 West Indies to host Bangladesh for Test, ODI and T20Is