Mumbai Indians(MI) have had a poor start to the the Vivo IPL 2018 losing all three matches in the season.

Mumbai Indians(MI) have had a poor start to the the Vivo IPL 2018 losing all three matches in the season. However, MI did not lose any of their matches by big margin as they took ever game to the last over. In their last encounter against Delhi Daredevils(DD) they were able to post a good total of 194. It was Jason Roy with his unbeaten 91 who took the game away from them.

Rohit Sharma after the loss posted on twitter assuring a strong comeback for MI and appreciated the knock of Roy and Rishabh Pant.

Disappointing result yesterday but we will do everything we can as a team to come back stronger. @JasonRoy20 and @RishabPant777 were just too good. Good cricket has to be applauded

This IPL has seen many high scoring games chased down. Rohit in his next tweet applauded MS Dhoni‘s innings against Kings XI Punjab(KXIP). Dhoni was see in his vintage touch when he smashed 79*(44) while chasing 197 almost taking Chennai home. He also mentioned that 200 is not a safe score anymore.

Great striking there by @msdhoni almost pulled it off. 200 not safe these days is it? Got a feel of it yesterday

MI are having trouble selecting their fourth foreigner as they have tried three different options in all three games. Adam Milne has been roped in by Mumbai as a replacement to injured Pat Cummins. Will he get a game today or will Akila Dananjaya be given another chance in the game against Royal Challengers Bangalore(RCB)? 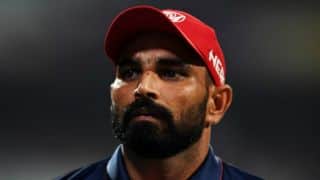