Shane Watson anchored the CSK innings as he recorded his third IPL century and first in this season.

Chennai Super Kings (CSK) posted a huge total of 204 for 5 against Rajasthan Royals (RR) after being put to bat in match 17 of Vivo IPL 2018. Shane Watson anchored the CSK innings with his third IPL century and his first in this season. He smashed 106 in 57 balls, the highest individual score in this season’s IPL till date, after being dropped in the first over. He hit 9 fours and 6 sixes in the process. He stitched fifty-run partnerships with both Ambati Rayudu and Suresh Raina.

Raina was replaced by Murali Vijay in the last match due to a calf injury he sustained in the clash against Kolkata Knight Riders (KKR). Back in the squad today, Raina looked in good touch. He smashed 4 consecutive fours off Ben Stokes in the final over of the Powerplay. CSK were 69 for 1 at the end of Powerplay. Then, in the 12th over, Krishnappa Gowtham took a brilliant catch off Shreyas Gopal to send Raina back for a 29-ball 46. The pair of Gowtham and Gopal struck again when MS Dhoni was caught near the boundary line on 5.

Watson and Dwayne Bravo provided the finishing touch. While almost every bowler went for an economy over 10, Gopal finished with impressive figures of 4-0-20-3. He got the important wickets of Raina, Dhoni and Sam Billings. However, he could not save his team from the Watson rampage. 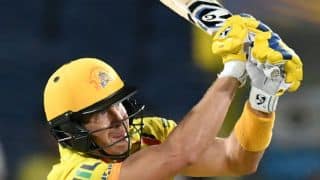 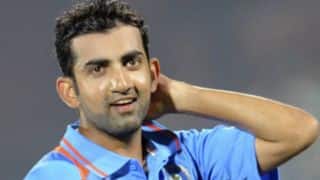