RR skipper Ajinkya Rahane remained unbeaten on 65 during his sides' loss to SRH.

It was Sunrisers Hyderabad (SRH) bowlers that once again prevailed over their opponents Rajasthan Royals (RR) in match 28 of the Indian Premier League (IPL) 2018. Ajinkya Rahane did manage to keep his side Royals in hunt, but could not take them past the finish line. It was the likes of Rashid Khan, Sandeep Sharma and Siddarth Kaul, who made life difficult for their opponents, helping SRH win by 11 runs. With this win, SRH take over top spot in the IPL points table.

Much like SRH s innings, Rajasthan lost their first wicket for 13 runs. Rahul Tripathi continued to fail falling for 5 off Sandeep Sharma.

Sanju Samson and Ajinkya Rahane got RR out of early jitters. On the score of 12, Samson completed his 1,000 IPL runs for RR. Both added 50 runs in 37 balls to send shivers down the SRH camp. Rahane s innings was the highlight of the partnership, where he just used deft touches to brilliance.

Siddarth Kaul came into the attack, and produced an instant wicket. Samson trying to heave the ball over midwicket, hands a simple catch to Alex Hales for 40.

Ben Stokes, who came out in middle, fell to Yusuf Pathan. Stokes looking to pull the ball, got beaten by pace and got his stumps rattled for duck. Jos Buttler joined Rahane in the middle, with RR needing 79 to win.

Unable to read Rashid Khan, Buttler went for the drive, handing Shikhar Dhawan a catch at mid off for 10. Rahane was still holding one end up.

Mahipal Lomror came out ahead of Krishnappa Gowtham. Rahane reached his 26th IPL fifty in 42 balls, inclusive of fours. Lomror fell for 11, trying to up the ante against Kaul.

Gowtham fell for 8 in the final over, with RR needing 13 to win. Basil Thampi getting his first wicket. Rahane remained unbeaten on 65, with Jofra Archer making one off one.

Earlier in the day, it was Kane Williamson and Alex Hales 92-run stand that helped visitors post 152 for 7. The trend followed for SRH, who yet again suffered a collapse, losing wickets left, right and centre. Jofra Archer picked 3 wickets, while Gowtham picked 2 wickets. 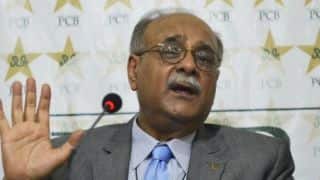