RR defeated RCB in a high-scoring encounter where the winners scored 217 for four and then restricted the home team to 198 for six.

Royal Challengers Bangalore(RCB) captain Virat Kohli admitted to having misread the Chinnaswamy track that turned out to be a batsman’s paradise rather than being a slow turner during their IPL match against Rajasthan Royals(RR).

RR defeated RCB in a high-scoring encounter where the winners scored 217 for four and then restricted the home team to 198 for six.

“Our thinking today was that the pitch is going to behave slower, but we were surprised because the ball came on to the bat nicely in first innings. We did not think that it was going to be a 200-plus run wicket, but it happened. That’s T20 for you,” Kohli said after the match.

“It is not necessary that everytime Chris Woakes walks out to bowl, he is going to get you wickets just because he has been picked up at the auctions for a hefty amount.

“Today was his off day and so it was for other bowlers (Umesh Yadav went for 59 in4 overs). 400 runs (across two innings) were scored on this wicket. I don’t think bowlers need to be too harsh on themselves,” the skipper’s words would certainly boost the morale of his bowlers.

Kohli also said he opted to chase a target because he did not expect 200 plus runs on what he thought to be a slowish pitch.

Replying to a query, Kohli said he wanted to have an extra bowling option in the form of Pawan Negi to take off pressure on regular bowlers, but the opposition played well against all bowlers including him.

“You can only prepare for certain things. It is not certain that the same will happen what you had planned. So, we need to accept that,” he added.

Kohli said the team needs to sit down and correct the wrongs, and moreover, 200 plus target is always going to be tough.

On Mandeep Singh and Washington Sundar‘s partnership at the end, Kohli said: “It was an outstanding effort by lower order batsmen because it gives confidence to the team if the top-order fails.”

Asked whether the team missed Sarfaraz Khan’s big-hitting prowess (he has so far failed), Kohli replied,”We pick players not according to their performance in a particular match but to bring in balance in the team. That should be the mindset for every team” he said.

Kohli also praised Sanju Samson for his 45-ball-92 and said that performance from players like him would only help the national team have a bigger pool of players in future.

“Batting first, worked in our favour. It was necessary for us to score maximum runs in the Powerplay, which we did. Towards the end, Sanju and Jos Buttler batted well. It was a tough ask for RCB to put brakes post 13th over,” he said. 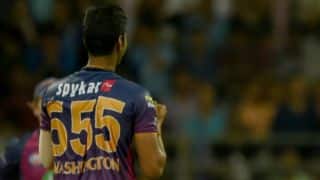 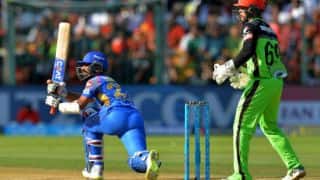