It will be an interesting battle between Delhi s famed batting line-up and Chennai bowlers.

For Delhi, it was a rollicking start as they performed with both bat and ball at the Wankhede on Sunday. While the top order showed tremendous grit and determination with Shikhar Dhawan and Colin Ingram sticking it early on, Rishabh Pant showed what he s capable of tonking seven sixes in his whirlwind 78* that came in just 27 deliveries.

It will be an interesting battle between Delhi s famed batting line-up and Chennai bowlers. While the Chepauk was a haven for spinner, the Kotla is expected to be batting-friendly which will mean that Dhoni will have to choose if he wants to go in with the extra spinner or whether he wants to beef up the batting order.

With both teams beginning with wins under the belt, which one will gain the early momentum at the Kotla? An exciting contest awaits!

What: Match 5, Delhi vs Chennai

On TV: Star network (in India)

You can also follow LIVE coverage of the match on CricketCountry.com (Delhi vs Chennai: SCORECARD)

Delhi will be quite content with the performance of their top four. However, Prithvi Shaw s form could be a concern with the youngster departing for just 7 to a careless flash outside the off-stump. The Mumbai batsman has not been in the greatest form of late with scores of 3 and nought in the Syed Mushtaq Ali T20 tournament not helping his cause. In the bowling department, Ishant Sharma and Kagiso Rabada led the show with the spinner chipping in with vital wickets. Axar Patel s figures could be a worry as he gave away 42 runs in his three overs, but picked up a crucial wicket of Hardik Pandya. With a win in their first game, Delhi will not tinker much with their playing XI and will go ahead with their same side for their first home match this season.

With the Kotla expected to be batting friendly, but gets sluggish with each passage of play, Dhoni may think about strengthening his batting order which means Shardul Thakur, who did not get to bowl in Chennai, may make way for England batsman Sam Billings. Remember, Chennai did not field four foreigners in their tournament opener, but could do away with that strategy in Delhi.

In T20s, you have to do something different. When the bowler cramps you for room, you need to make your own room. Rishabh Pant 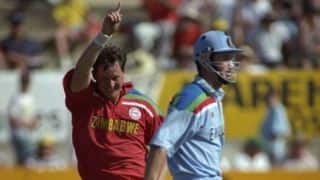