Needing 15 runs before the match, Raina added 19 as the hosts chased down Bangalore s paltry 71-run target in 17.4 overs.

Chennai s crushing seven-wicket win against Bangalore in the Indian T20 League season opener at the MA Chidambaram Stadium in Chennai on Saturday will be much sweeter for Suresh Raina, who reached 5000 runs to become the first player in the storied history of the tournament to arrive at the feat. (ALSO READ: Suresh Raina first player to 5000 runs in Indian T20 League)

Needing 15 runs before the match, Raina added 19 as the hosts chased down Bangalore s paltry 71-run target in 17.4 overs. The 32-year-old southpaw has been Chennai s most consistent batsman. Besides playing in two seasons for the defunct Gujarat Lions, Raina has been with the MS Dhoni-led yellow brigade since its inception. (VIDEO: Chennai dominate Bangalore in T20 league opener)

I have been playing at No. 3 from the start and it allows you to play a lot of overs. My batting style is quite attacking. Batting at that spot gives me a lot of freedom and it also allows me to bat according to the conditions,” Raina told his team-mate Harbhajan Singh in an interview for the tournament s official website.

“I have played with so many players and have taken the responsibility of scoring runs for my team. I also get that license of attacking inside first six overs. It’s not always easy and you have to live in the present. I am really happy that I went past 5000 IPL runs and we got a good win the very first game of this season.

Raina aside, it was the veteran offspinner from Punjab, Harbhajan, who stole the show in the opener claiming three big wickets of Bangalore captain Virat Kohli, AB de Villiers and Moeen Ali to break the back of the run-chase.

“I am really happy. Yes, I was under a bit of pressure because I didn’t play a lot of cricket before this match. I only played three games for Punjab, but it was good to come here and practice, get my rhythm back,” Harbhajan, who won the Man of the Match award, said.

“I was called to bowl just in the second over and once I bowled a couple of deliveries, I realised “sher budha hua hai but shikar karna nahi bhula (this old lion can still hunt)”. We got help from the surface, not much with the new ball but the old ball was turning a lot.

“It was a challenge for me to perform for my team and getting Virat, AB and Moeen was very satisfying. Hopefully, I can keep contributing with ball and bat, if needed.” 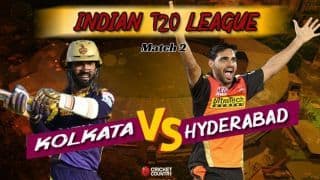