Virat Kohli was on a rampage as he scored 57 off 30 in pursuit of 218 against Rajasthan Royals(RR) in the Vivo IPL 2018. He broke numerous records in his innings. He joined Suresh Raina in 4,500-run club, he also completed 26,000 runs in professional career, he recorded his fastest 50(26) in T20 career and also joined Gautam Gambhir in most number of half centuries(53) in T20. Kohli is now only 31 runs behind Raina to become the top run-scorer in IPL. With Raina warming the bench for the next two matches due to injury, Kohli might surpass him convincingly in a game or two.

Earlier in the match, Sanju Samson guided RR to the highest total in this year’s IPL with his impressive innings of 92*(45). RCB having a very strong batting line-up seemed like the only team who could chase it down. However, Brendon McCullum went cheaply for four in the first over itself.

Quinton de Kock and Kohli kept the current rate high until de Kock was out in the eight over. Kohli and AB de Villiers in pursuit of scoring quick runs ended up giving away their wickets. Mandeep Singh and Washington Sundar tried their best to catch up with the required run-rate in the end but failed to do so as RR won by 19 runs. 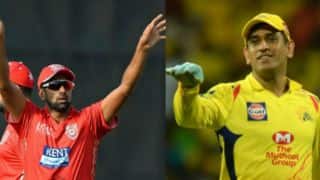