With India on the verge of conceding a 1-2 series lead to England in the ongoing four-Test rubber, the national selectors are likely to ring in some changes in the squad for the fourth and last Test in Nagpur, starting December 13. 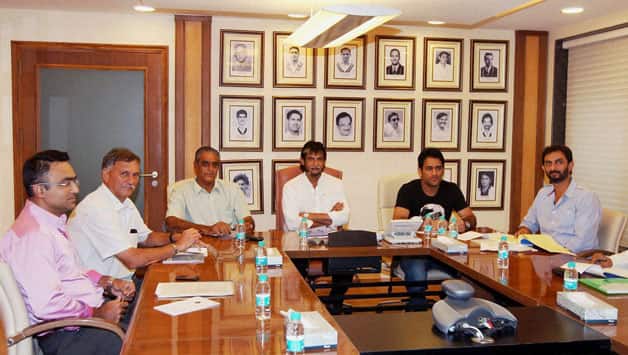 With India on the verge of conceding a 1-2 series lead to England in the ongoing four-Test rubber, the national selectors are likely to ring in some changes in the squad for the fourth and last Test in Nagpur, starting December 13.

The five selectors, under chairman Sandeep Patil, will meet at the team hotel on Sunday to pick the squad for the Nagpur Test.

Yuvraj Singh‘s spot is likely to be up for debate with talented Manoj Tiwary and Rohit Sharma seen as a possible replacement for the stylish left-hander.

Bengal batsman Tiwary scored an impressive 93 against England XI during their warm-up match against India A. He also smashed a fine 191 against Gujarat in a Ranji Trophy game which should attract the eyes of the selectors in tomorrow’s meeting.

Rohit Sharma is another name which is doing the rounds after the right-hander scored eye-catching 112 and 79 in the ongoing Ranji Trophy games.

Many of the top order batsmen have not shown the desired consistency in the series. Virat Kohli has been woefully out of form but the selectors are likely to persist with him.

If the problems with the famed Indian batting department were not enough, the selectors will also look to fix the issues in the home team’s bowling attack, which looked toothless in the last two Tests in comparison to the English bowlers’ fine showing.

The pace duo of Zaheer Khan and Ishant Sharma looked lacklustre in the ongoing third Test at the Eden Gardens here and their selection will definitely be under scrutiny.

Zaheer, who took just as wicket after bowling 30 overs in England’s first innings during the ongoing third Test, looked unfit and was also criticised for not taking starts while fielding.

But all said and done, what might go in Zaheer’s favour is his experience.

Comeback man Ishant was equally out of sorts, claiming just one wicket in his return Test after more than 10 months.

Bengal pacer Ashok Dinda is a sure selection and in all probabilility, he might even make his Test debut in Nagpur.

In the spin department, Pragyan Ojha‘s place in the side appears to be guaranteed after returning as the best bowler for India with four wickets.

Even though, Ashwin has drawm some criticism for his bowling in the last two Tests, the off-spinner may just make the cut after saving India from the ignominy of an innings defeat in the ongoing Test with an unbeaten 83-run knock in the second innings.

The selectors might also be forced to give a look to Amit Mishra and Piyush Chawla as the English batsmen are susceptible against leg-spin.

Mishra, who has 13 wickets from four Ranji matches, has a slight edge over Chawla having claimed 4-67 in the warm-up match between India A and England XI just before the start of the series.

Baroda in command after Bhargav Bhatt's six-for against Odisha