Lambasted at home for their poor performance, senior Indian cricketers got some unexpected support when Australian captain Michael Clarke said they are good enough to turn it around soon like his predecessor Ricky Ponting. 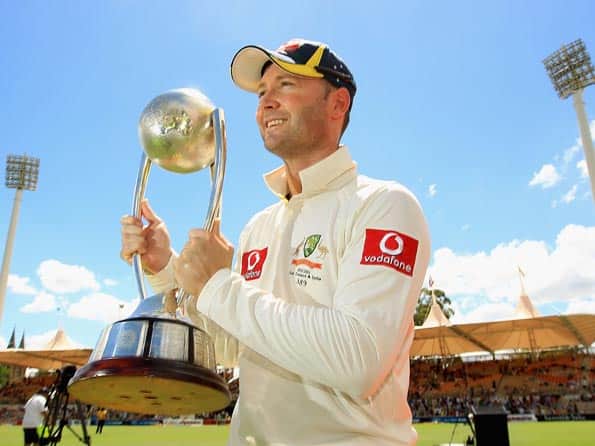 Michael Clarke posing with the Border-Gavaskar Trophy, which Australia retained after their crushing 4-0 win against India Getty Images

Lambasted at home for their poor performance, senior Indian cricketers got some unexpected support when Australian captain Michael Clarke said they are good enough to turn it around soon like his predecessor Ricky Ponting.

“They are a very good team, a lot of experience, a lot of knowledge. I’m pretty confident they’ll turn things around,” said Clarke after registering a 4-0 scoreline against the tourists in the Test series today.

“I have the utmost respect for every single one of their players, they have achieved a lot of as a team and achieved a hell of a lot as individual players, I hope they continue to have success in Test cricket and their senior players can play a big part in that.”

The trio of Sachin Tendulkar, Rahul Dravid and VVS Laxman is under intense pressure after failing to make a single hundred in the series.

Clarke gave the example of Ponting who was a massive success in the present series, scoring a double hundred and a century. Ponting was struggling to retain his place in the side when he came into the series.

“Now we’re saying he’s batting as good as he’s ever batted. When you’re not performing, you need to hang in there. I’m confident they can turn it around. I don’t really want to get involved in what India’s plans are and how that’s going to work. Fortunately I don’t have to answer that question because that is for the Indian team, that is for MS Dhoni and the Indian selectors to talk about and think about and assess”

“Today I sit on the other side and say the work we have done over the last 12 months. We’re seeing some rewards and it’s satisfying,” said Clarke.

The moment of truth Clarke mentioned was the 3-0 loss to England at home, all of them by an innings margin.

“We went through the same pain that India is feeling right now 12 months ago, we lost the Ashes. It’s really nice to be on the other side of the fence today. I was asked, not as captain, the same question 12 months ago once we lost to England and we as a squad, as a team, as a vice-captain at that stage, needed to assess where we needed to improve our game.

“The loss in South Africa and the loss against New Zealand is something that I guess every player in that change room has had in the front of their minds. Individual players who were a part of last summer remember it very fondly and knew we had to do a lot of work to improve our games both personally and as a team,” he said.

Clarke, besides his responsibility as a captain and a batsman, is also a selector within the Australian set-up. He was asked if that was the role Indian captain too should have within the set-up.

“I think it has been good to be able to voice my opinion as part of the selection panel. You are one of five though, so the selectors, if they disagree, I have only got my one vote. But it is pleasing, more than being a selector, the communication and the relationship with the selectors, captain-coach, has been very pleasing for me.

Clarke reiterated he would try to make his team more consistent.

“The consistency has been an area that we’ve had to work on as a team. I hate to say it but I think you need that throughout your career. You need to go through a few tough times individually and as a team to realise how hard Test cricket is but then how special it is when you have days like today and a series like this.

“We’re currently ranked fourth in the world so we’ve got a hell of a lot of work to do to get back to where I’d love to see this team going. We’ve shown a lot of people around the world that we’re on the way up. We’re getting there. We’re getting better every day,” he said.

“It looks convincing the end result winning 4-0, but I can guarantee you there was certainly a lot of tough times throughout this Test series,” he added.

The Australian captain also patted himself on the back for the form he has shown throughout this series.

“I think I have learnt a lot along the way over the last four Test matches. I think I will continue to learn. I have said that I wanted to lead from the front on the field and make sure I was scoring runs,” he said.(PTI)

Rahul Dravid has played his last Test for India: Sources