Displaying their old camaraderie when they used to clobber bowlers into submission, cricket legends Sachin Tendulkar and Sourav Ganguly were Saturday enthused by the success of the inaugural Indian Super League (ISL). With the Tendulkar co-owned Kerala Blasters FC and Ganguly co-owned Atletico de Kolkata slogging it out in the middle in the maiden ISL final – billed as a clash between the two titans of cricket – the duo hoped for many more such encores.

Tendulkar turned nostalgic as he spoke about his salad days with Ganguly.

“With Dada [Ganguly] it has been a shared joy to be in the same team and a challenge when he was playing against me. We have grown up together right from our junior levels,” he said during the half-time of the final at the D.Y. Patil stadium.

“It’s been an excellent journey to play cricket but this is a different platform. This is about football and ISL,” said Tendulkar. “It’s terrific that we have received such a response wherever we have travelled across India and I want to thank all for supporting us. This is a new platform for both of us and we will continue to meet each other,” said Tendulkar, who partnered the southpaw to amass over 8000 runs in One-Day Internationals (ODIs).

As their teams jostled to get the better of one another, both Tendulkar and Ganguly looked pensive and displayed varied emotions but standing beside each other during the half-time chat, the old spark was visible which made them the most successful opening pair in ODIs. Admitting being tentative about the success of the franchise-based football league, Ganguly expressed his happiness over the ISL’s popularity.

“We are competing in one way and together in another way. We are together for the game of football and ISL because the response has been tremendous. When we got the teams, we were tentative as to how successful it’s going to be,” said Ganguly.

“Sachin’s home ground Kerala has been getting 60-70 thousands people every game. Despite the final being on a neutral venue (Mumbai) so many people have come. I think it has been a tremendous success,” added the former Indian captain.

Bharat Ratna awardee Tendulkar also called for introducing sports at the grassroots to enable identifying talent at a young age.

“It should start from grassroots level and all schools should encourage introducing sport at grassroots level. Children at the age of five should play outdoor sports which will make them healthier and fitter in life. “I am not saying that the entire nation should become professional sportspersons but they could be healthier lawyers, healthier doctors or architects. The whole idea is to identify talent at an early age,” added the former batting superstar. 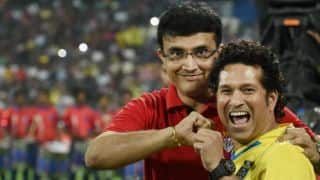