Dharamsala, a picturesque international cricket venue, could soon be the next destination for football’s Indian Super League (ISL), if Himachal Pradesh Cricket Association (HPCA) president Anurag Thakur has his way.

The BJP MP from Hamirpur, who is also joint secretary in the Indian cricket board, wants to bring big-ticket football to Himachal Pradesh through ISL at its serene HPCA Stadium, in the shadow of the snowcapped Dhauladhar Ranges.

“We will be writing to All India Football Federation (AIFF) president Praful Patel that we are keen on hosting the ISL,” said Thakur.

Thakur added that the cricket stadium is fit to host football matches. However, Thakur added that hosting the first edition of the ISL will not be possible as the tournament is too near and they will be aiming for next year.

Thakur said that as the ISL will be played on a home-and-away basis, some franchises would be welcome to host their home matches in Dharamsala. “That will be decided by the organisers. We will be happy to host anyone,” added Thakur.

“The ISL can generate a lot of revenue. It will boost tourism, popularise the stadium and help the economy of the state as well. We will have to get in place a good drainage system needed for a football ground and technology is so advanced today that anything is possible,” said Thakur.

The first edition of the IMG-Reliance-managed football league starts Oct 12 in Kolkata when Athletico de Kolkata squares off against Mumbai City FC at the Salt Lake Stadium. The tournament will conclude Dec 20.

The HPCA Stadium has hosted only one One-Day International (ODI), an India vs England contest in January 2013 in addition to some of the Indian Premier League (IPL) matches. The stadium will host its second ODI match Oct 17 between India and the West Indies. Dharamsala stadium to be inspected for Test status 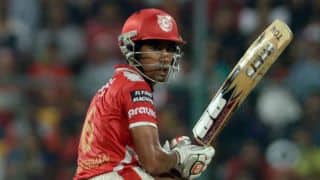