Indian T20 League 2018: Chennai matches in Tamil Nadu amidst Cauvery controversy will be an embarrassment,

Amid opposition to Indian T20 League matches here in view of raging protests over Cauvery issue, Tamil film star Rajinikanth today said it would be good if organisers stopped the games in the city as such a gala event would be embarrassing when the entire Tamil Nadu was agitating.

Alternatively, he suggested Chennai team players play here wearing black bands as a mark of expressing the anguish of people who have been staging protests demanding setting up of Cauvery Management Board.

“Playing IPL matches here when whole of Tamil Nadu is agitating for Cauvery (management board) will be an embarrassment,” he told reporters here referring to the opposition from different quarters to the event.

The Board of Control for Cricket in India (BCCI), Indian T20 League authorities and the owners of Chennai should extend their cooperation by allowing the players to wear the black bands, he said.

Rajinikanth also appealed to the fans to wear black colour dress to extend their support to the stir.

Amma Makkal Munnetra Kazhagam (AMMK) leader T T V and some pro-Tamil outfits have opposed playing of IPL matches in the city, citing the ongoing protests in support of setting up of CMB.

Dhinakaran has appealed to the cricket fans to shun the matches scheduled to be held here in order to strengthen the voice of farmers’ seeking CMB.

Pro-Tamil outfits including Tamilaga Vazhvurimai Katchi have also opposed holding of IPL matches in the city.

Opposition DMK Working President M K Stalin had said the organisers of the league should realise the issues faced by the people and act accordingly.

“We are not saying that it (matches) should not be held.

The organisers should realise the problems of people and act accordingly,” he had said last week.

Fisheries Minister and senior AIADMK Leader D Jayakumar had said the BCCI would realise the situation in Tamil Nadu and decide whether to hold the matches or not.

Seven league matches are scheduled to be held here between April 10 and May 20. 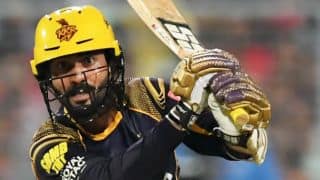