The debutant captains of Indian T20 League 2018 had beginners luck during the coin toss. Dinesh Karthik followed Ravichandran Ashwin, and invited Bangalore to bat first in both sides’ tournament-opener at Eden Gardens. However, it was always going to be a humongous task to stop a batting lineup comprising of: Brendon McCullum, Quinton de Kock, Virat Kohli and AB de Villiers. Barring de Kock, the famed trio combined to take Bangalore to 176 for 7.

After analysing Ashwin’s captaincy, cricket pundits turned their heads towards Karthik’s style of leadership. He commenced the match with veteran Vinay Kumar. There were no pacers till the seventh over. Karthik shuffled around Sunil Narine, Kuldeep Yadav and Piyush Chawla. The run-flow wasn’t out of control, but McCullum found the odd boundaries in between. De Kock went for 4, and Kohli took time to get going.

Just one McCullum (43) was looking to up the ante, he fell to Narine. Playing early, his stumps were rattled. From thereon, the ABD-show began and he added a brisk 64-run stand with Kohli. The Indian skipper played second fiddle, and de Villiers attacked Narine, Kuldeep and Johnson. He lashed onto anything offering width, and played down the ground.

Karthik resorted to Andre Russell after the 13th over. It led to a change of script. His five-run-over added pressure, and Karthik gambled with part-timer Nitish Rana. De Villiers-Kohli went after him, in order to make it up for Russell’s over, and both fell on successive deliveries. While ABD was removed on a poor short delivery, which didn’t find elevation, Kohli was shell shocked on a seam-up yorker.

The run-scoring became difficult for the newcomers in the death overs. With Russell, Johnson and Narine’s overs in the reverse, Kolkata pulled things back significantly. From 116 for 2 in 13 overs, Bangalore would have eyed anything near 190. In the end, they still managed 176 courtesy Mandeep Singh and Vinay’s poor bowling. 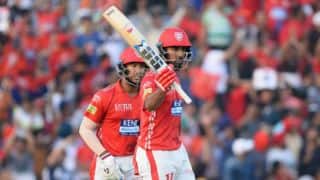