The Indian Women's Hockey Team will next face the United States of America on 21 and 22 June in Rotterdam, Netherlands. Both the matches will be played at 2000 hrs IST.

Rotterdam: The Indian Women’s Hockey Team fought its heart out and took down World No. 2 Argentina in the first match of their FIH Hockey Pro League 2021/22 tie in Rotterdam, Netherlands on Saturday, 18 June 2022. After the two teams ended the regulation time at 3-3, the Indian side defeated Argentina 2-1 in shootout through goals from Neha and Sonika. Meanwhile, Lalremsiami (4′) and Gurjit Kaur (37′, 51′) were the scorers for India in regulation time, while, Agustina Gorzelany (22′, 37′, 45′) scored a hat-trick for Argentina.

The Indian team made a circle penetration in the opening minutes of the first quarter through a brilliant pass from Neha to Vandana Katariya. Moments later, the Indian Women’s Hockey Team earned a Penalty Corner, however, the Argentine defense unit ensured that the 0-0 deadlock wasn’t broken. The Indians continued to put pressure on their opponents and Lalremsiami found the back of the net in the 4th minute after deflecting a pass from Deep Grace Ekka.

The Argentina team tried to fight back as they earned back-to-back Penalty Corners in the 6th minute, but the Indians kept their opponents at bay. India and Argentina played a neck and neck contest for the rest of the first quarter.

The Indians rode on the momentum and effected a circle penetration in the opening minutes of the second quarter, however, they couldn’t find a way to extend their lead. The Argentine team counter-attacked and earned a Penalty Corner in the 21st minute, but the Indian defense unit ensured that the ball is kept away from their goal.

However, the Argentina team earned another Penalty Corner soon after and Agustina Gorzelany didn’t miss out on the opportunity to find the equalizer in the 22nd minute. Neha made a brilliant run in the 30th minute and earned a Penalty Corner, but the Indians couldn’t convert the chance.

Salima Tete carried out a fantastic run in the opening minutes of the second half and took a shot, but she didn’t find the back of the net. Moments later, the Argentina team made a circle penetration and earned a Penalty Stroke. Gorzelany took her mark and converted the opportunity to help Argentina take the lead at 2-1 in the 37th minute.

However, the Indian team fought back quickly and earned a Penalty Corner as Gurjit Kaur slotted the ball into the goal and leveled the score at 2-2. The Argentines obtained back-to-back Penalty Corners in the 41st minute, but the Indian defense unit stood all and kept their opponents at bay. However, in the final minute of the third quarter, Agustina Gorzelany converted a Penalty Corner to hand Argentina the lead at 3-2.

Lalremsiami and Salima Tete got into fantastic positions to find the equalizer in the 48th minute, but they couldn’t find a way to strike the ball into the goal. The Indians kept putting pressure on their opponents as Gurjit Kaur converted a Penalty Corner in the 51st minute to help India level the score at 3-3. Thereafter, the two sides played out a hard-fought contest before ending the regulation time of the match at 3-3.

The Indian Women’s Hockey Team will next face the United States of America on 21 and 22 June in Rotterdam, Netherlands. Both the matches will be played at 2000 hrs IST and will be telecasted live on Star Sports First and Disney+ Hotstar. 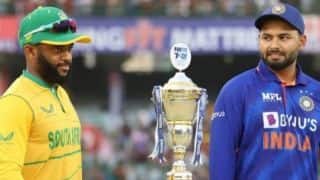